It’s been a wet week here in the sunny south east. The fire has been lit again, cattle have been brought back indoors, calves have been kept in, the cows are messing up fields and coming in to the parlour in most disgruntled moods only slightly mollified by the promise of yummy nuts in the parlour. 5 ‘stragglers’ have calved in the last ten days, all giving birth to bulls which is bound to even up our bull : heifer ratio to 50:50 more or less. Artificial insemination has started on the cows and heifers in heat with a few very busy mornings.

Wednesday morning was a bit like Piccadilly Circus. The lorry collecting the last cattle going to the factory was late. The AI man arrived and couldn’t get past the lorry so had to wait. There were 13 waiting for him so he was here for about 45 minutes. Two newborn calves decided to be fussy and not drink their milk. It must have been 11:30 before we got indoors for our ‘breakfast’. I’m not sure why but neither of us tends to eat much before doing the yard work, we prefer to work up an appetite instead. It always seems strange that some farm households have their dinner at exactly midday, seems incredibly early but it all depends on what you are used to I guess.

We have a number of feral cats on the farm, tom cats come and go but we’ve had the same 4 or 5 female cats for a while now. Apparently lots of farmers manage the catch the wild cats and bring them to the vet to be spayed – I guess if we used something like a mink trap it might work but I wouldn’t like to be putting my hand in to grab hold of the cat! One of the young females had her first litter of four kittens 10 days ago, one was dead but the others were fine. It’s rare that we see kittens as newborns as they normally hide amongst the straw bales but she had them in a shed, right beside the dog’s kennel! There was a nice comfy bed of straw there in the corner as we put any poorly calves there under an infra red lamp.

She has been the most incredible mother. She is always with them. We do give her some food and milk and I presume she goes out around occasionally, maybe at night, to stretch her legs but she has them curled up to her permanently. Even when standing up to eat, she hunched her body upwards and brought her legs close together so they would stay hidden and warm under her trunk. She really is giving them the most perfect start to life – lots of mother’s milk, warmth, her body heat, her constant protection (we helped by putting up a barrier, she can get out but just in case the dog decided to have a nose, he can’t), and her devotion. ?They may not get cuddles from humans, and indeed, you’d be lucky to get near them to be honest, but they don’t want for anything at the moment. 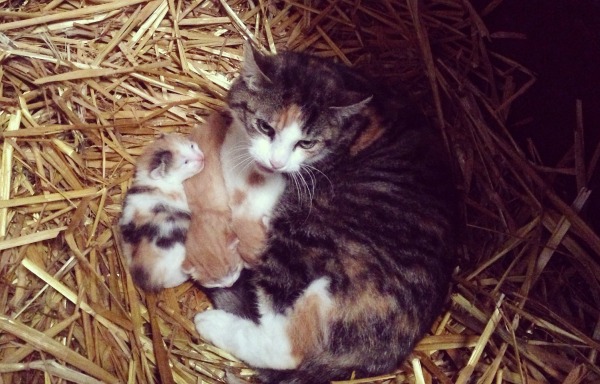 They are getting much bigger now. At ten days old, they are becoming more mobile, their eyes are open and they sleep in a line beside her body, all snuggled together for body heat and for comfort.

I’m not a great fan of cats to be honest, I’d never have a house cat, partly because of allergies but I much prefer dogs. A few years ago we had two Tom cats on the farm which is unusual. One was a ginger one who used to come to the back door to be fed. Maybe he was once tame or else he was desperate. If the other Tom arrived, he used to flee so I used to have to stand over him while he ate so he would get enough. He fathered a number of kittens, the children thought it was quite amazing that he was both the father and the grandfather to three little kittens. He disappeared for a couple of years and then came back and lived the last two years here, eventually dying of old age. It was at least eight years since we had first seen him so he was probably in excess of ten years old.

Years ago, when I was in boarding school, there was one stage that there were a lot of cats around and there was one fairly tame black and white cat that used to hang around the back door. Maybe she was thrown out from a passing car or something and made her way to the house. Coincidentally, it happened one Monday morning that a black and white cat appeared around the girls boarding house at school. Hungry, looking for attention, she received lots of it from many girls and the two house mistresses.

No, we didn’t deliberately ship her in but as we were minus a black and white cat at home, we worked out that she must have jumped into the boot when I was packing the car and jumped out when we got to our destination. I presume she ended her days there, having a long lonely summer but getting lots of attention during term times.

Part of me rejoices in seeing the children growing up and part of me pangs for when they were smaller and I could envelop them in my arms. I don’t get as many ‘love you’ type notes dotted around the house from Kate as I used to get. Nothing like lifting up the lid of my laptop and finding a’I love you’ note though. 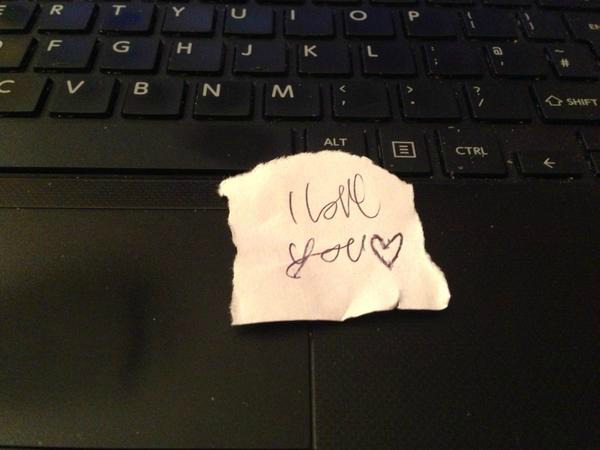 Will loves scaring us, as in waiting until we are in a world of our own and then jumping out with a loud ‘boo’. He manages to scare Brian quite a lot when he is out feeding the calves meal but Brian got his own back the other morning and waited in the meal shed for him to walk in with his two buckets. Long may it last though!

22nd May is the date for a referendum here in Ireland and there’s been much debate about it for weeks. To be honest, I felt that surely the Yes campaign would win but as the time has got nearer, the No campaign seems to be hotting up. When you think that so many sons and daughters have probably left rural Ireland for the anonymity of big cities in Ireland or abroad because they are gay, it really is about time that there was acceptance and celebration of all relationships. 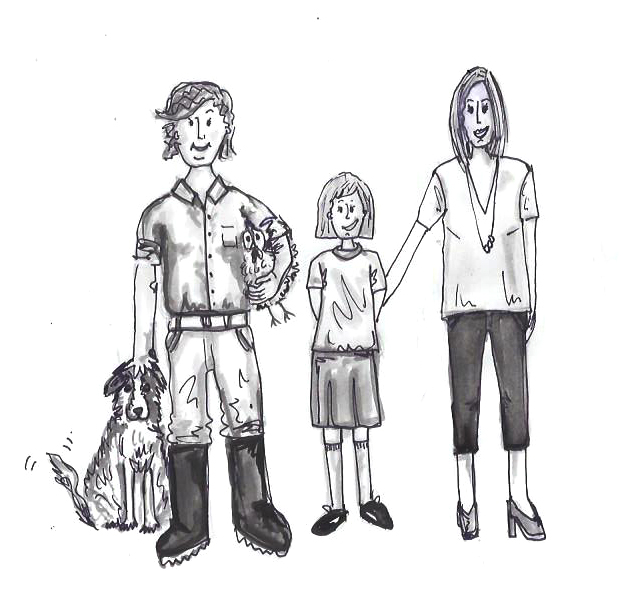 I got my illustrator to do two of the illustrations for my book early and here they are. I’m voting yes on 22nd May. 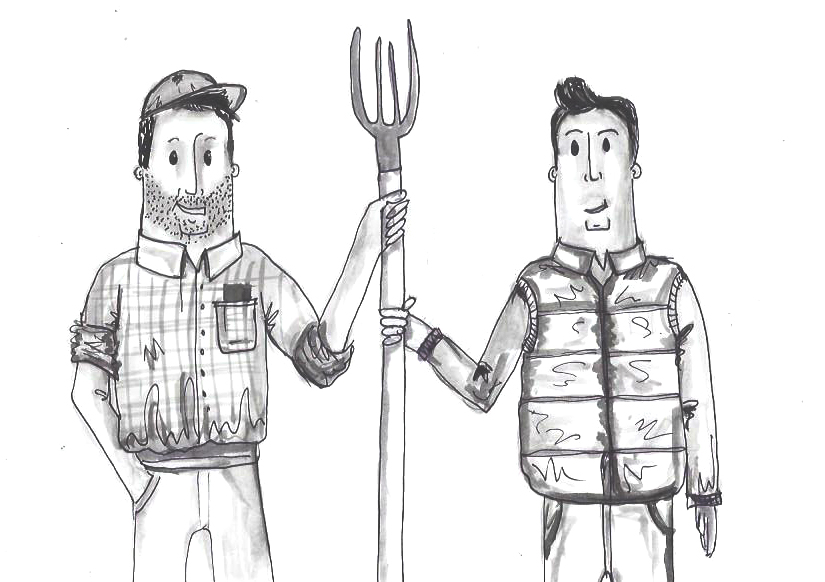 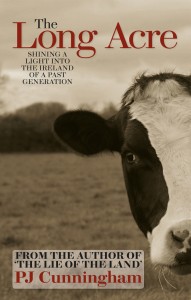 I stopped doing my weekly book reviews some time ago as I’m finding that when writing a book, it’s not so easy to read a couple of books a week. I’ve just read The Long Acre

?though and if you are looking for a nice read, an insight into rural Ireland particularly the 1960s, this is the book for you. PJ Cunningham lived on a relatively small farm in Co. Offaly. His father was 48 when he married his mother and while he was healthy until his 60s, the hard work and stress of farming then took its toll. PJ’s mother died of cancer when he was about ten. His father wanted to see both his sons educated and sacrificed to send both of them to boarding school and university.

There’s plenty of insight into 1960s Ireland, as electricity made its way slowly into rural Ireland, the hand milking of cows, the driving them along the road from field to parlour, the relationships between neighbours, the cutting of turf, matchmaking, the loneliness of farming and more. The Long Acre refers to the ‘free grass’ that the cows ate in the ditches as they meandered from field to parlour and back again.

We had visitors to the farm this week, nieces and nephews of the farmer who lived adjoining our land opposite Garrendenny Lane. Brian and I bought part of his farm in 2006. As you probably know, the number of unmarried people in rural Ireland in the 1950s and 60s was very high. Much of the reason was due to not being able to afford to marry but added to that was the social acceptance of being unmarried plus the unavailability of suitors and the requirement of a dowry. Many women didn’t want to marry a farmer much older than themselves, recognising that living in a ramshackle cottage or farmhouse without running water but with a mother-in-law was not what they wanted so either stayed single or emigrated. Out of eight children in their father’s family, only one married – their father, who moved to Dublin and then to England in the late 1950s. Two brothers and a sister stayed living in the home farm and one brother bought the land adjoining Garrendenny. Looking at photos reminded me how thin and wiry so many farmers were then – not an ounce of spare flesh, strong, wiry, women wearing headscarves and a housecoat to protect their clothes. 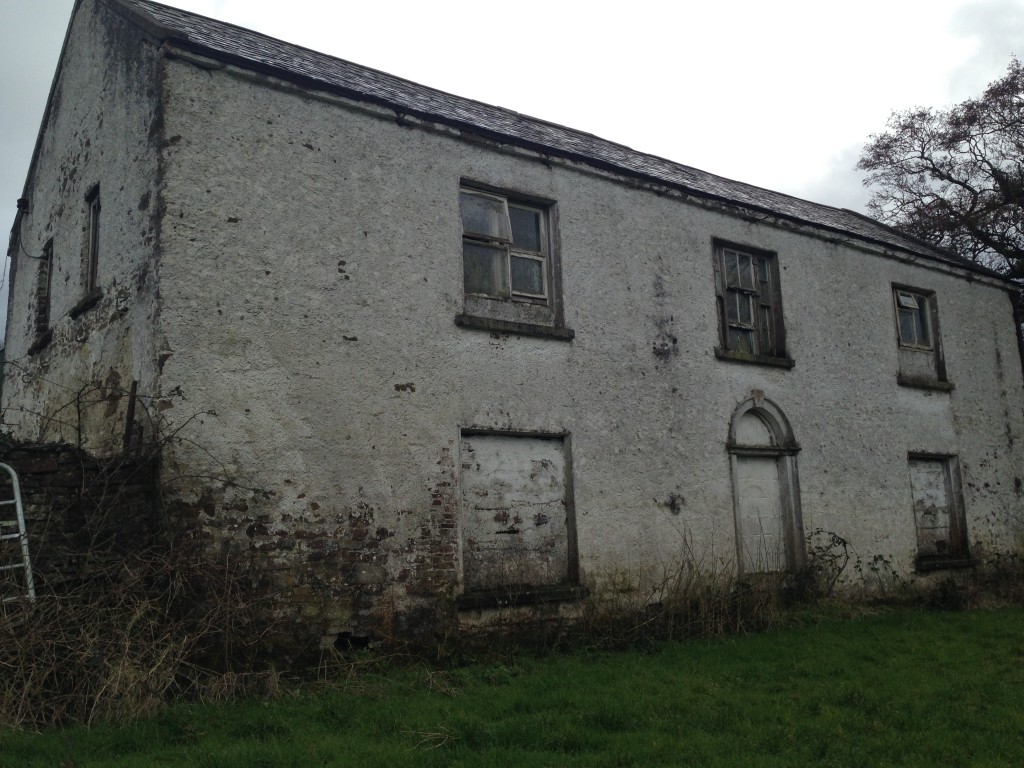 Jack never had electricity when he lived on that farm. My grandfather had campaigned hard for electricity and when it became available nearby for the local mines, I think he had been such a pest that they installed it in the late 40s. It would have cost Jack a small fortune to get it extended up to his rural farmhouse so it was actually afterwards he had sold it in 1988 that the next owner owner had it installed when the ESB made electricity available to rural farmhouses. A difference of forty years between two farms that were less than half a mile apart as the crow flies.

How times have changed so quickly in recent decades. The next few years in farming will certainly be interesting! Oh, and if you would like to sign up for the newsletter, it will be coming out within a week.