I’m not sure if Murphy’s Law is the best description for this – apparently it refers to ‘Anything that can go wrong, will go wrong’. Maybe Sod’s Law is a better fit – it means that it will always go wrong with the worst possible outcome. Well, things can always be worse to be honest but when things go wrong in farming, it is usually more serious than toast falling to the floor butter side down.

I was away last Sunday at a ‘Influence Mastery’ conference by Owen Fitzpatrick which was brilliant by the way, apart from the content, I always learn lots about presenting just from watching the different styles of the presenters as they are all so varied in style and yet so good. I don’t get to many conferences – the occasional women in business one, occasional agricultural or social media conference and I’m hoping to get to a couple of writing festivals this year. I don’t tend to read self help type books, relying on Owen’s blog, books and conferences to keep me inspired and on the straight and narrow. I first met Owen in 2009 when I was on the RTE programme ‘Not Enough Hours’ when he helped out with my time management on camera and some other stuff off camera. It sounds a bit grim but we can great craic doing it, learnt a lot and I got a straight talking shrink on speed dial for life 😉 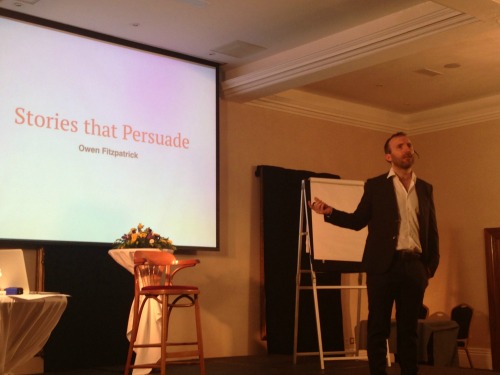 Anyway, I digress, as I had left early, Brian had fed the calves in the morning and Will helped me with the water and meal in the evening. I didn’t go into one calf shed at all. Brian texted me after milking to say that 2222 was dead, he had found him alive and called the vet but he was too far gone. Now, it is horrible losing a calf at the best of times but to lose the best calf in the herd really made it seem that someone was having a laugh. We had called him Arthur, he was our highest EBI bull calf and was our best chance of getting a bull calf into an AI station. Dovea were coming out shortly to look at him and another calf. Even if they didn’t take him, we would have used him as a bull for ourselves.

We were gutted. I reproached myself on not going into that calf shed. Brian reproached himself for being late milking and being so late to see him. We were cross that it had happened to the best calf, not just because of the money but because of the interest in seeing how he would do, in seeing the genetics continue down the line. Then we did the usual farmer thing and were grateful that it happened up the yard and not in the house! And so it went on – anger, reproachful and grateful.

He was hugely bloated. When the abbattoir guy collected him the next day, he said immediately that it was a twisted gut. We had suspected that (lost one like that last year too, it died just as the vet arrived) but it was nice to have it confirmed. A twisted gut is just one of those things. If caught early enough, I guess it could be operated on but the bovine gut is more complicated than other animals. We had to get a calf put down earlier in the year as it couldn’t defecate. The bovine intestine is in three parts and if the connecting piece doesn’t connect properly, they die or have to be put down. Apparently it is worse in Holsteins than other breeds and even an operation has a very limited chance of success.

I suppose it would have been worse if it had happened after Dovea had called and if they had agreed to take him. His EBI was 364 and they are looking for them to be closer to 400. As it happens, they are giving us semen from the same sire again for the same dam. Initally I had thought that was a bit daft as if Arthur wasn’t good enough, would his full brother a year later not either but hey, it would be nice to have a full brother now. 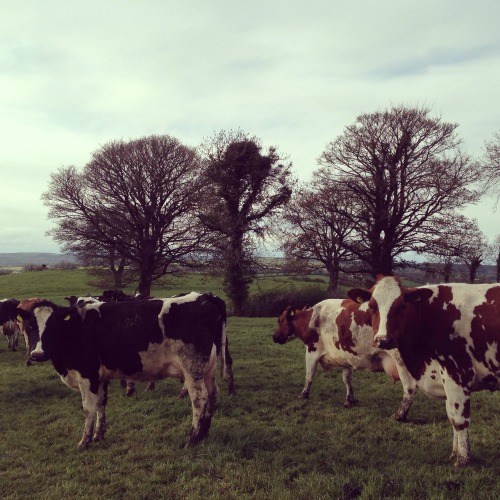 I’m not sure why farmers blame themselves when we lose calves. Sometimes losses happen because of illnessness or just one of those things such as a twisted gut. Admittedly, calf deaths can sometimes be prevented – using an easy calving sire on heifers makes life a lot easier for farmer, cow and calf. Apparently quite a few farmers used high EBI bulls on heifers last year wanting to drastically increase the EBI of their herds but it backfired as the sires weren’t proven as easy calving, heifers needed Caesarean sections and often the calf was dead. But when we compare ourselves to maternity hospitals where lives are so much more precious, and babies are still lost, we aren’t doing too bad.

We might think things are bad now but 80 years ago, they were a lot worse. I remember hearing of a farmer who brought young piglets to the mart. Rather than coming home with money from the sale, he couldn’t sell them for any money and ended up drowning them as he couldn’t afford to feed them – now that is incredibly tough. Back in the 1930s, during the Economic War with Britain, De Valera decided that Ireland could starve out Britain by not supplying them with beef. Unfortunately, Ireland didn’t have another outlet and cattle prices fell drastically. ‘Strong’ farmers of 30 acres or more struggled financially and I’d imagine labourers suffered even more as the farmers cut down on labour, not being able to afford it.

To solve the problem, De Valera decided to pay farmers an amount for every calf skin so the number of cattle in the country would decrease. Farmers had the horrible job of slaughtering calves, skinning them and yes, having the carcasses piling up. But DeValera hadn’t realised that 25% pf calves died then on an annual basis and of course, farmers skinned them too and submitted so farmers were claiming for more than DeValera had budgeted for. According to one story in Worse Could Have Happened by Andrew Forrest, a pregnant cow had died and in attempting a post mortem, the farmer discovered twin calves that were almost due to be born so they were skinned too. That’s what you call a silver lining to the cow’s death!

The 1930s were tough times – when researching for How To Be A Perfect Farm Wife (out in September), I found this letter to the Irish Independent Feb 22nd 1935.

Sir, I sympathise with ‘Another Downtrodden Farmer’s Wife’ and endorse her remarks. I am a farmer’s wife and the mother of a large, young, helpless family. I am up in the morning at 7 o’clock and prepare a meal for eight, get ready three children for shcooo. which is 3 miles distance. When breakfast is oer, I have to start out to assist my husband to milk 8 cows, feed calves, pigs, fowl etc. I have then to attend to milk, tidy my house, was on a day, churn etc in their days during the week.

A couple of years ago we were able to employ a man to do most of the yard work and also a girl to assist in the house but owing to the present conditions we find it a hardship to provide food for her own family, not to mention extra members.

Prices for cattle – if they can be sold at all – are so bad that they would hardly meet the poor rate, let alone the sheriff’s demands. We have to try to keep our household bills paid with eggs and butter, which at present are selling at a very low rate, and, as bad as the prices may be, we cannot afford to have any for our own use.

The getting of clothes for the family is at present out of the question as there is no money to purchase any. We farm 30 acres, till 5 acres, our rent rates are ?30 per year. The blacksmith’s bill, harness bill, seeds, manures and cattle medicines amount to ?10 per eyar. We sold 7 cattle for ?35 last year, ?5 less than our rent, rates and expenses. The crops produced on the farm are consumed by the young stock and for domestic uses. The work on this is done by my husband and myself.

Up to this we have been the silent sufferers in this unnatural war, and I think it is high time some persons, political or otherwise, would make some move to remedy these hardships. 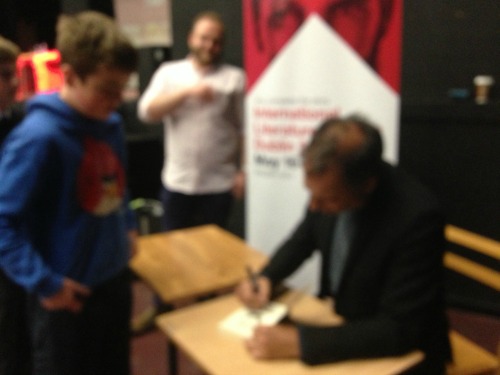 It’s a pity this photo is blurred. My camera phone plays up occasionally – time to get a new iphone I think! I had happened to notice that Anthony Horowitz was coming to Dublin as part of the launch of the Dublin Writers Festival, he is one of Will’s favourite authors so I booked the free tickets straightaway! It was excellent, inspired me too with the line ‘the only difference between successful writers and unsuccessful writers is unsuccessful ones stop writing’. I’ve read the first Alex Rider since too and it’s very good. W was delighted to get this favourite Alex Rider book signed.

I’m often amused that sports-mad parents often like to have sports-mad kids. To be honest, hearing pushy parents at the side of rugby or GAA pitches leaves me cold but I kind of understand it as I’d hate if my kids didn’t enjoy reading. I’m delighted both of my kids love reading. I love to see them engrossed in a book, seeing the expressions on their faces change as they read. I loved reading both of them Harry Potter three years ago. Will is encouraging me to read Skulduggery Pleasant at the moment as he wants to discuss them. I’ve only had time to read the first one so far.

After a nice April, we’re into a wet and windy May. The cows are coming into the parlour in grumpy moods which doesn’t make the milking that pleasurable. Their protein had been 3.62% and butterfat 3.93% which was good. I’ve been lighting the living room fire again, Kate has been baking scones, it’s been feeling very wintry. There’s an expression ‘A wet and windy May feels the haggard with corn and hay’. It worked last year, would be nice to have a good summer again – here’s hoping. 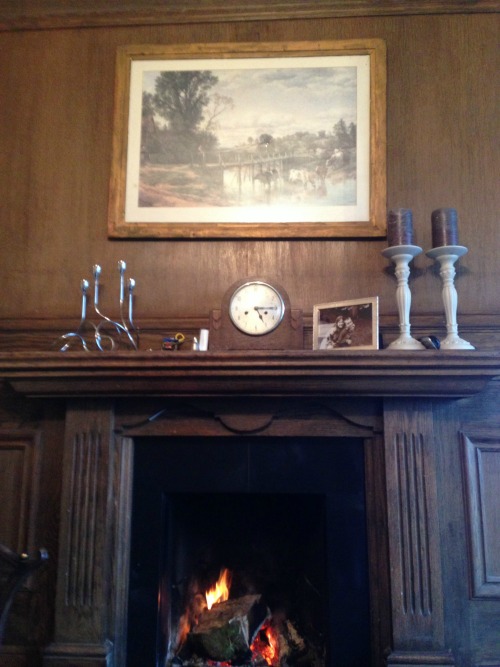 How was your week?