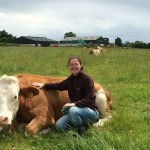 12% of Ireland’s registered farmers are female. That means that the percentage of women farming registered with a herd number is 12%. Apparently half of that number are widows which suggest the majority of them are over 60. That translates into 6% of Ireland?s farmers being young and female. However, is this really a true reflection on the facts? I’m afraid I don’t have the time or the means to do a full investigative survey. However, partly through interviewing women for my next book and chatting to female farmers on Twitter, I’m going to bring you a couple of interviews in this blog, interviews with women who are farming full-time. Next week I’m bringing you the interview with Leonie who had no farming experience whatsoever and is now farming full-time while her husband helps her at the weekends. Today’s interview is with Maria Phelan, both she and her husband are registered farmers, she came from a farming background and gave up her off-farm employment a couple of years ago and is now farming full-time while her husband works full-time off-farm. 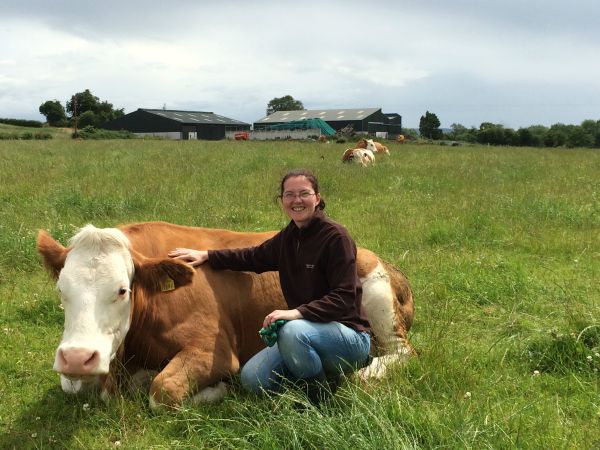 1. Tell me a little about yourself and your family. Do you have a farming background??Where are you located and what kind of farming do you do?

As the youngest in my family with 3 older brothers, I was brought up on a dairy and pedigree Charolais/Simmental beef farm in East Cork. My dad worked all hours so I didn’t get to spend that much time with him at times. My mother helped to move cattle or helped to milk the cows and feed the calves and as she had a fear of heights she never set foot inside a tractor.

I remember asking my parents to kiss each other because I never really saw either of them being intimate/spend any real time together in the same way I saw my friends parents do. Of course they obliged which then caused me plenty of embarrassment. But I like to think it made them change their ways as not long after they blocked out three weeks every summer to spend time with each other & go on holidays with me. My eldest brother at that stage was old enough to control things with the help of my other two brothers.

As a family we were heavily involved in showing cattle and both the pedigree Simmental & Charolais herds would have been well known in breeding circles for its quality and consistency. It’s mainly from this experience that my love for farming bloomed. It was also a perfect way for me to spend more time with my dad. But whatever way you look at it, it was a joy to be close & intimate with cattle.

I am located just outside Durrow, Co Laois in a place called Knockanoran. The home place is 60 acres and a further 170 acres are rented within half hour’s drive in opposite directions.

Both of us are farming for the last six or seven years, each in our own right as organic beef suckler farmers affiliated with IOFGA & BORD BIA.

We are pretty much self sufficient in the fact that we can grow enough of our own feed – red clover silage both pit & baled as well as meadow hay – to fodder cattle through the winter and also provide enough of our own manure & slurry to spread upon the land. We expanded our herd in the last few years having started with 30 to a number of just under 200 now. We buy in replacement in calf heifers when needed to replenish non performing cows. We finish bullocks/heifers to the factory most months. 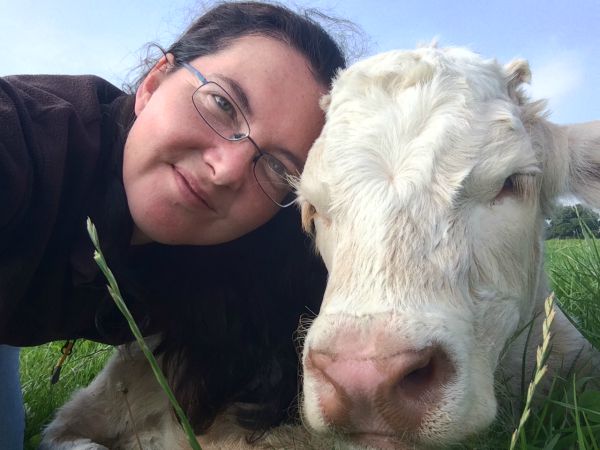 While they are graded as organic and expect a higher price than conventional cattle, the recent increase in prices has for some inexplicable reason not been passed onto organic beef as much, oh well that’s competition or lack thereof.

Being organic means we can’t buy in non organic stock.Any approved medicines given must have their withdrawal period doubled and detailed on sale / kill forms if administered within the past 24 months. All feeds have to be approved if not provided by you or another affiliated organic producer. It’s basically all about traceability which involves a lot of paperwork. This falls to me as it is on most farms with most women doing the paperwork. We are audited annually by IOFGA & Dept of Ag jointly and every 18 months by Bord Bia.

On the farm I do everything that is within my physical ability, so that EXCLUDES slurry spreading (not manure) castrating, dehorning & difficult calving, trimming tails can be tricky too. I had spinal surgery late last year so have to be careful. I curtail the amount of tractor work I do in one sitting.

3. Do you think your role in doing most of the farming is unusual amongst farm women?

I don’t tend to see other women driving around in a tractor on my journeys or standing in a field for hours looking between in-calf cows legs for a milky udder. I don’t have friends that do it either. I?m sure there are but they aren’t very visible.

Do I feel they are underappreciated? ?y thought on this is personal, in that my husband & kids appreciate me for it, my Dad is proud of me. I have to admit my eldest brother (a large dairy farmer) & my girlie friends are still a little in disbelief.

I feel the powers that represent farming to the public should speak up and acknowledge that there are lots more women who do what I do, and that do all the paperwork, lend a hand and get involved. It’s not that long ago since farming women had to fight for recognition and rights to a pension.

4. Why did you decide that you, rather than Fintan, would farm full-time?

I would call myself a farmer, plain & simple, because the majority of my waking hours are dedicated to just that. I do know I didn’t end up in this role by accident, but by desire & hard work while keeping a 9 to 5 job going & rearing a family at the same time as building up my end goal, farming.

In the end it was a decision made jointly to give up the 9-5 when I took parental leave a few years ago. My husband was promoted to a management role in his workplace, earning more than me. During parental leave, I lived off the farm income that was budgeted and was able to manage both the family life & farm with ease. At the end of the day my husband would be back to a dinner and not have to go outside the door for the evening, that is of course unless something popped up during the day I couldn’t do. 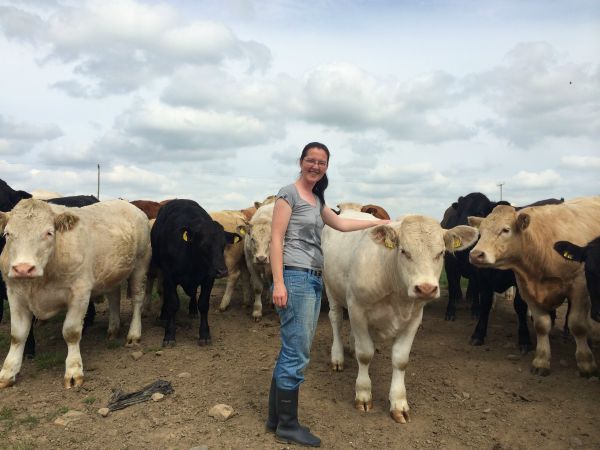 5. What are the advantages for you as a family?

Before this, family life was sometimes stressed. The kids were between creche and school, I was rushing to & from work, and my husband was the same with at times very late hours even though his hours were supposed to be 9-5. We would eat dinner at 7:30and put the kids to bed at 8 and then Fintan & I were outside till 10 if all was good or midnight if extra work was needed. The thing is this is common for many families not just farming families.

6. Do you have any advice or tips for women considering farming full?time?

My adviceis do it, do as I have done, as long as:

-you have calculated that your farm can afford you as an employee for a sustainable period of time.

-you like your own company, as it is a very solitary life even with a husband & kids

-you are willing to take on back breaking, sweat inducing, and welt creating work

-you enjoy being your own boss

-be willing to obviously work very long hours & not just 40 hrs per week as the CSO reports would have you believe. Depending on the season, you will be tired beyond belief & just like having a baby forget completely how painful that time was.

All in all, my family life is busier but its quality is much greater, I face things with greater confidence than I could before and I have a brighter outlook on life since I took that step to be the fulltime farmer.

There you go, I hope you enjoyed that interview and found it interesting as well as proving that women farmers are a force to be reckoned with – be they farming full time or assisting their husbands who are the registered farmers.

Oh, and by the way, I’m being interviewed on TV3’s Seven O’Clock Show tomorrow (Friday), yes, about farming. Ellen McGovern from Wicklow is joining me on the sofa so do tune in if you can.