Goodness, I can’t believe it was February when I last published an update about my self publishing journey of selling my book. I will start off with the hard facts – the sales to date of ‘Would You Marry A Farmer?’

I’ve sold at least 1200 printed books but less than 1400. I have 420 left here out of 2000 but it is hard to tell how many are actually sold as books have been sent to bookshops but how many are sitting on shelves and how many are sold is impossible to tell.

It is now in Easons nationwide, however, how many branches are actually stocking it or how many just have it available for order, I’m not sure. ?Easons in Carlow took it first and sold the first 10 books within a month – I asked them if people were looking for it or picking it up when they saw it on the shelves and it was the latter. It was doing well in the humour and the wedding sections. To me, this proves that books need to be on the shelves to generate those sales, people need to touch it, flick through it as well as read reviews or see it in the press.

It’s easy to think that when a wholesaler takes a book, that it’s easy to get into the bookshops and yes, a crucial hurdle has been passed. But it still depends on the bookshops knowing about your book and on their deciding whether to stock it or not. The wholesalers have thousands of books at their disposal and there’s a limit to how many they can focus on in their newsletter. ?I’m not sure how many stockists are stocking it now. I called into a few bookshops to check and when I didn’t see it there, I showed them a copy and asked them if they would like to stock it. In one case, the manager commented that they had had people ask for it (which made me wonder why they hadn’t ordered it) but on seeing it, she ordered it straightaway. I ?can’t call into every bookshop though! When I knew I was going to be on Ireland AM, I emailed quite a few independent bookshops and a few responded to say they would order it and a couple said they had it already. If someone on twitter asked me where to get the book in Dublin or Cork, I reply and include bookshops that are on twitter and that I know have it.

There’s a lot more to selling books that having them sitting in bookshops though. My book is definitely for the gift market as well as the farmer families. I’ve noticed from sales to my own website (with the messages that I’m asked to write) that many are being purchased as hen party gifts, wedding props and engagement gifts. 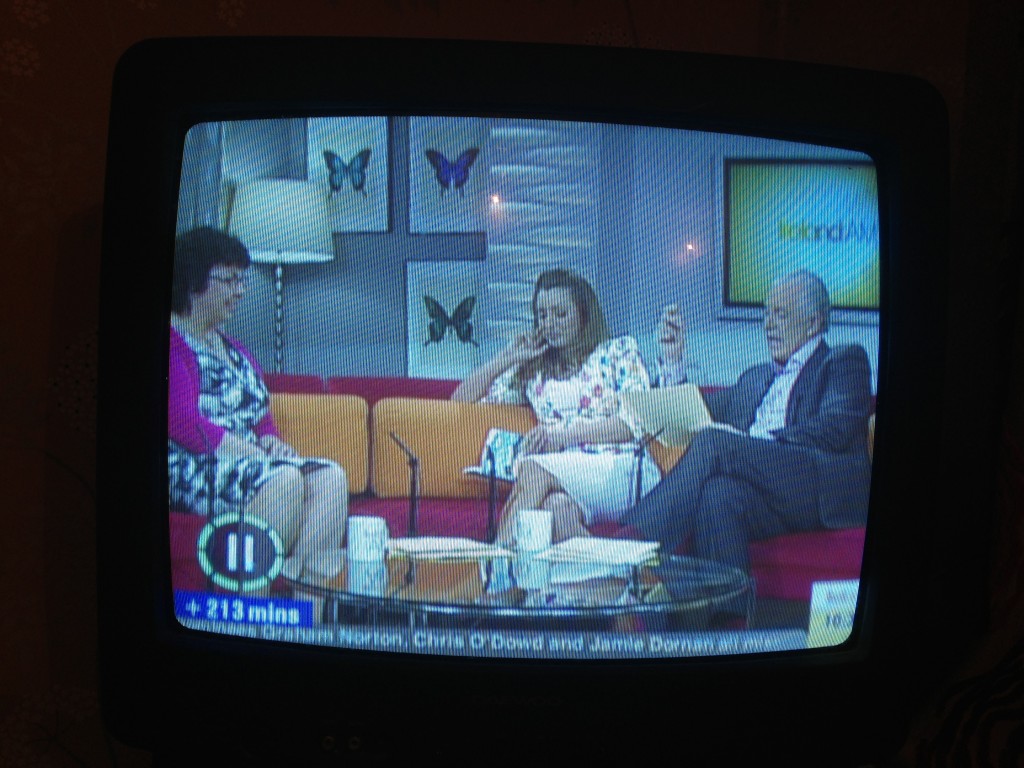 My interview wasn’t available on iplayer so this is just to prove I was on there!

Some time ago, I read that having ?a blog is just as effective as a TV appearance in terms of selling your book. I’d argue that having both makes for more success. ?So what effect did my 10 minute TV interview on Ireland AM have? ?In terms of impulse sales, it was limited. I did have a surge of sales to the website that week with about 20 purchases. It’s hard to tell with the bookshops though, as Argosy sent out 35 books in May and 76 books in June (interview was mid May) but I don’t know how many were sold from the bookshops that already had it on their shelves. Ireland AM features a lot of books so viewers won’t be buying books every day! What the TV appearance also generated was more PR – more local radio stations contacted me that week for interviews and it’s a great way to reach local audiences. I was interviewed on Shannonside, South East and Cork local radio stations. Ear to the Ground magazine contacted me and did an interview for their next edition, another magazine contacted me as a direct result of the interview (interview and photoshoot happening later this month, all going well). It’s all about increasing brand awareness as well as sales really.

What I did experience though was a great buzz about being on TV – I feel it gave my book great credibility and kudos to have achieved that. ?I think having a blog is probably more effective in terms of long term publicity though. Oh, and Des Kenny (of Kennys Bookshops) reviewed my book in the current edition of Isle Magazine (page 20). I was really chuffed with that.

Sales at the Golden Shears were disappointing but I didn’t pay for a stand so there wasn’t a financial loss. I had people who bought it and came back the next day to tell me how much they enjoyed it. I had others who looked at it and then told me they didn’t read books. I had people I knew who were surprised to see me there and then looked awkward, hoping they weren’t going to be asked to buy one! So a real mixture but interesting in terms of research too.

What I plan to do too is to contact some ‘lifestyle’ shops, for example, Avoca has a table of jokey lifestyle marriage type books so they are on my list to telephone. I contacted the Arboretum and they are now stocking it, they get great footfall so it will be interesting to see how it goes there and how they display it. Contacting these takes time though and it’s a lot easier when you have a contact to message on twitter or facebook or even email!

What I love, well, I love every sale that comes to my website especially when I’m asked to sign it with a note, but I love the multiple sales, when someone orders the bundle of 3 or 5 copies. Not just because I’m selling more but because they like it enough to buy more of them as gifts. 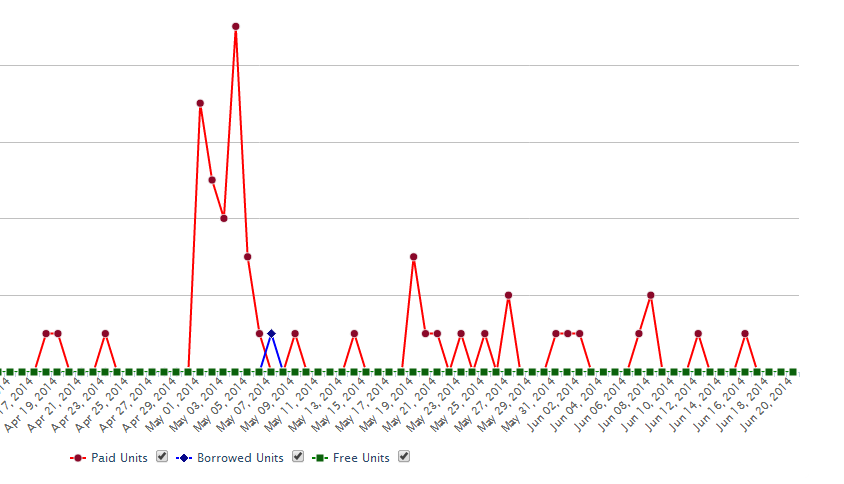 Ebook Sales on Amazon for 2 months

In terms of ebooks, I’ve sold about 120, 50 in the last 3 months and that was even with running a KDP Select promotion for 99p. I do feel that social media plays a huge part as the number of tweets I got from people telling me they had purchased it correlated pretty well with the sales that week. Now that the KDP promotion is over, I must put it on smashwords.

Whether you publish or self publish, most authors have to work hard to promote their own books and it is hard work. I’m giving it a break for a while now and had planned to crank it up for the Ploughing Championships in September but am doing the Tullamore Show too on 10th August so will be contacting their local media soon. 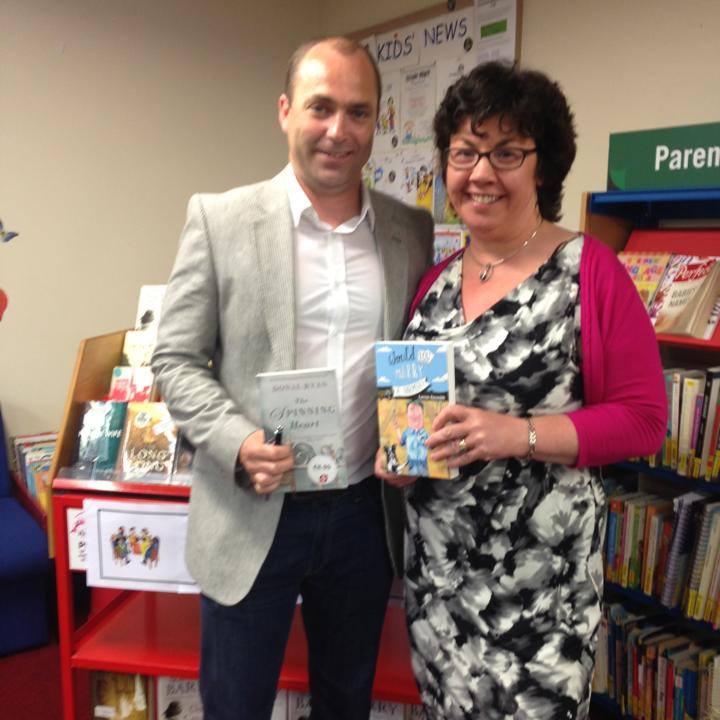 I particularly enjoyed being asked to speak at a Kilkenny Library event recently too. Donal Ryan was giving a reading and over 100 people gathered to hear him, then they stayed around to listen to my short talk on my ‘blog to book’ journey. ?That was good fun. 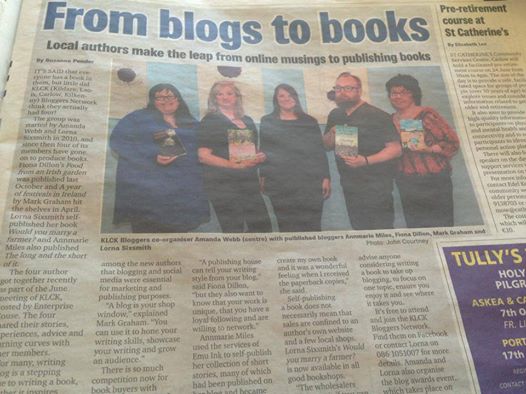 As part of the KLCK Bloggers Network meetings of which I am co-organiser, I arranged for the Carlow Nationalist to come and photograph four bloggers turned authors and submitted the story. It’s all about keeping up the brand awareness and I’ve just had a call from someone who saw it in the paper and suggested something that could be quite effective in terms of reaching an international audience so watch this space. PR can lead to more press coverage.

The good news is – 1200 sales is considered good apparently so I’m just going to keep plugging away and hopefully these 420 in my dining room will diminish even more. Books supplied to bookshops are on sale or return too by the way so hopefully I won’t have any winging their way back to me!

I’ve started Book 2. I was writing a kind of memoir but have shelved that for the time being. Book 2 is going to be in a similar genre, and yes, aimed for the fun gift market. It’s working title is ‘how to be the perfect farm wife – the cheater’s guide’. Not that I can even claim to be an expert cheater at it let alone a perfect anything but maybe I’ll learn something as I’m writing it – well, that’s what the farmer is hoping! I’m aiming to write 30,000 words this month, 1000 a day and finish the writing by Christmas and then give myself plenty of time for editing, illustrations, book cover etc and then publish it next spring / summer, all going well.

If you are thinking of self-publishing too, I hope it gives you an idea of what it is like and if you have self published, I’d love to hear what you think or how your experience compares. I’m focusing on self publishing and social media over at Write on Track this month so do check out my blog posts there too.