I’ve been intending to start ‘Social Media Saturday’ posts on this blog for some time now in order to share social media tips for farmers, particularly those who are selling or planning on selling directly to consumers or to supermarkets. I’m a firm believer in ‘People buy from people’ and if consumers recognise your brand or feel they know you because of your social media presence, they are much more inclined to buy from you.

I met The Little Milk Company at the Farmers on Film conference on Tuesday. I had seen their video 3 or 4 weeks before and having spotted their cheese at Carlow Farmers Market the previous Saturday, I had bought it, recognising the name and the brand – all because I had watched the video.

Incidentally, their video came 3rd in the Cheese Factor competition so well done to them.

Just as the Little Milk company shows the story of their farmer suppliers on their website, the supermarkets and fast food companies are using this as a tool too – showcasing their farmer suppliers of milk, beef and lamb. Aldi and McDonalds are just two examples. But farmers can do it for themselves at very little financial cost.

I’ll share tips and examples each week but for today, I’m going to share a few tips from just 3 or 4 of the speakers that were shared at the conference. They say that if you can pick up one tip from each speaker, it’s a very good conference so I’ll share some of those with you.

Sarah Gayton, one of the most energetic and enthusiastic women I have ever met, is the lady behind Farmers on Film, organising a ‘farmers on film’ competition, firmly believing in how film has the power to inform consumers and grow farmers’ businesses, and a social media conference. 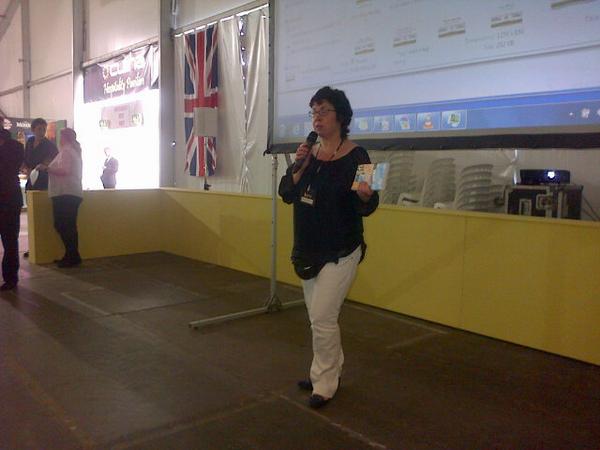 I explained how crowdfunding works and the role that social media played in my success. It was interesting as my talk was followed by Nigel of Indie Farmer who is currently crowdfunding for his own project. Do check it out. He has been producing an online magazine and is planning on producing a print version. He has started an ‘Around Britain and Ireland’ trip on Veronica, his motorbike, and will be sharing stories about his travels and the farmers he visits.

Fiona Lake, who is a wonderful photographer, showed us photos from her homeland in Australia and made the point that what engages others is what is similar yet different. A simple point and so important and yes, so true too. For example, I love reading about how other dairy farms, all over the world, operate – different feeding and milking systems, different breeds, different weather. I like reading about all types of farming but particularly enjoy reading about dairying. I also like seeing what individual farmers do with their milk. Airbnb are becoming more popular (it’s a form of B&B that don’t have to conform to really high exacting standards, providing a more relaxed (and cheaper) form of accommodation. Fiona was making the point that Airbnb would work well for farmers as visitors may be looking to learn more about farms, it would provide handy extra income, and farmers could secure more visitors by using social media well.

I actually dreamt that night that we did up our spare room and advertised it as available on Airbnb. I woke up at 4am then wondering why on earth we had done that as we both value our quiet evening time and are ridiculously precious about family time for the four of us. I’d hate to have people staying but for people that are much more sociable than Brian and I, it would be perfect!

As Fiona showed with her beautiful photos, pictures tell a thousand words and using photos on your blog, twitter, facebook, instagram etc are all means for engaging potential customers. 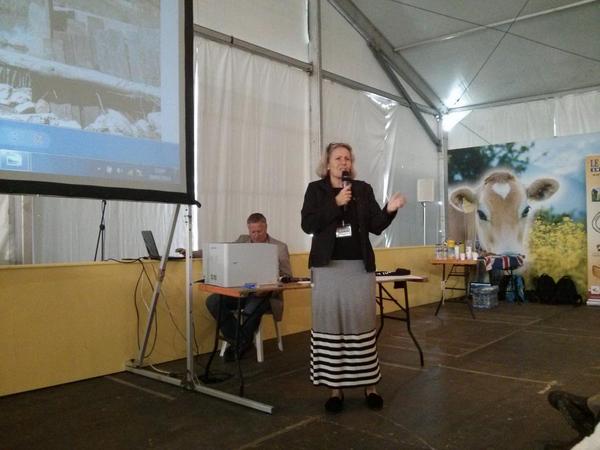 It was lovely to meet Milly Wastie, a busy farming advocate and organiser of ‘Ladies in Ag’, they are active on twitter and meet up regularly every few months. When I attended a Teagasc conference about a year ago, it was suggested that Irish female farmers organise something like that but I never heard anything more. And no, I won’t be organising it – too much on with the Blog awards and @IrelandsFarmers as it is! Milly is now travelling all over the world promoting food and farming.

What I took from Milly’s talk was the huge amount of work done by the agricultural industry and the media in promoting British food. I had noticed the #buyBritish on twitter and of course, the #teamdairy and #sosdairy hashtags. (We needed an #sosbeef hashtag here earlier in the year!). Over there, they have the Farmhouse breakfast week, Great British Beef Week, Love British Food harvest services just to name a few – all to promote British food and to sink it into the mind of consumers. There’s a lot we could learn from that.

James?Rae claimed he only joined twitter three months ago and has already amassed 7,000 followers so he has definitely taken to it like a duck to water! As James said, it doesn’t work if you only write tweets that ‘sell, sell, sell’ all the time. It’s about showing your personality, thanking consumers and welcoming them back to your farm or restaurant when they tweet you to say they enjoyed the experience. Tell them you look forward to seeing them again or that you are glad they enjoyed your Irish beef or your Irish Kerrygold butter.

I could go on but if you would like to read more, do check out the #FarmFilmFest hashtag on twitter. It was a great conference and is bound to get even bigger next year. 2014 was only the start.

Here’s the video that came first in the British competition:

Here’s the video that came second in the International competition:

I really enjoyed the conference – meeting farmers who are so enthusiastic about the power of social media to promote their businesses, meeting people from the first time, meeting new people, learning from them, finding they believed in the same principles as I do. Had a great day.

If you would like to see more farming videos – check out this page on Farmers on Film. I’ll have some social media tips each Saturday now – especially for farmers / food producers. Now that I have taken the plunge, I will keep it up most weeks.