We went to see War Horse last night, it wasn’t our first choice (wanted to see The Artist but it wasn’t on in Carlow) but having read the book and enjoyed it, I was also looking forward to seeing it on the big screen. 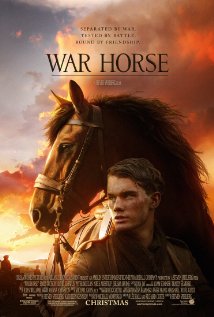 I was expecting a war version of Black Beauty with a little bit of Saving Private Ryan regarding the war scenes thrown in. ?I became very dubious on seeing the opening scenes. Filmed in Dartmoor, the presence of a large farm shed in the middle of the shot and a modern white two-storey house in the far right of the shot didn’t help to make it look very Edwardian!

It was a beautifully shot film, lots of dramtic closeups, lots of close ups of Albert and Joey (boy and horse), with plenty of inspiring landscape scenes.

I know you have to leave some scope for poetic licence but there were just too many silly things in the farming part of the film:

Maybe I’m just too practical! Having said that, it was a beautiful film. I did watch through the credits for the identity of Joey, wondering how many horses were used as his persona but didn’t see it. Googling it this morning, I discovered that Finder was the main horse but that many horses played the parts of Joey and Topthorn, disguised with non toxic paint. ?An animatronic horse was used for most of the no man’s land scene.

The story of a horse’s relationship with its many owners and how so many people recognised (and many who didn’t) the fact that he was special, one in a million, will really resonate with so many viewers. ?In the background was the constant reminder of how all the horses worked, were shot when they could do no more, on average lasted a month pulling the heavy artillery. When we think of WW1, we tend to think of the thousands of men who died in the trenches and the Irish men who fought and weren’t appreciated but we don’t tend to think of the animals, the millions of them that also gave their lives for their masters and their country, many of them being killed by that horrific barbed wire.

It reminded me of Corporal Jack, a novel by Marjorie Quarton which tells the story of a dog ?who survived WW1, also moving sides across no man’s land, was the mascot of the royal Dublin Fusiliers, saving his master’s life and being rewarded for his bravery.

One thought on “WarHorse – what an Irish farmerette thought of it!”