I was recently asked how am I so positive on this blog? Initially I was a bit nonplussed by the question. Am I that positive? Is farming expected to be pessimistic? My initial thought was well, isn’t that the beauty of social media? Okay, it does have its negative elements with cyber bullying but on the whole, people tend to put their best side forward on their blog or on their facebook profile. What I particularly like about social media too is that if someone is consistently miserable, I don’t have to connect with them there and then, I can unfollow or unlike them if I want. ?I’m not deliberately positive on this blog although I do remember that I didn’t write about farming much on it during last summer when farming conditions were becoming direr week after week with the wet weather. ?Maybe I’m deliberately not pessimistic! ?I can be a tad ‘Victor Meldew’ like but that’s usually tongue in cheek – and let’s face it, can be quite enjoyable to be grumpy occasionally!! 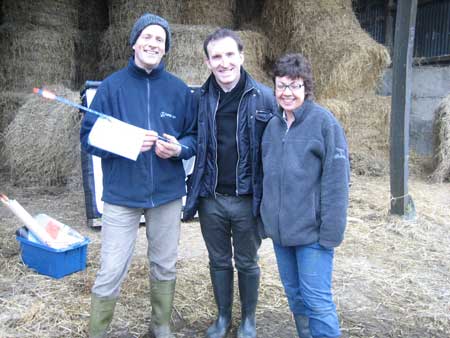 Reading Owen Fitzpatrick’s book Conversations over Christmas shed some light on the whole theory of NLP and I liked one of Owen’s explanations of NLP. ?Things happen to us in life, some good, some bad. NLP doesn’t stop the awful things happening but it does help how you perceive them and your attitude towards life. ?You can either look on an event as an event or as a problem but guess which will help you feel happier about it?

This explanation also made me realise why my husband was so scathing of NLP. When I was going on the Charisma bootcamp last year, he couldn’t understand why I’d want to go, he likes Owen and has huge respect for him but he still saw it all as ‘paddywhackery’! Why? Because Brian doesn’t need NLP to help him become more positive, he does it all naturally without even thinking about it. He sees events as events, not problems, and will always see the positive in almost every situation. ?I do think one needs this attitude in being self employed but particularly in farming. I mean, if one is losing calves to Rotovirus or cows to salmonella, one has to be glad that the deaths are happening in the yard and not in the house and I think that is a common expression amongst farmers when such events occur.

Because Brian seems to have this positive attitude naturally, he finds it hard to appreciate that other people don’t! With 1 in 4 people experiencing depression at some stage in their lives, theory like NLP is needed. ?I experienced mild depression in the past, I remember the consultant suggesting the anti-depressant medication and I was thinking to myself ‘But I’m happy go lucky, matter of fact, relatively jolly, I don’t do depression.’ I did go on the medication for some time, and then just stopped taking them when I felt better. I can’t say how good it is, now and for the last few years, to feel cheerful naturally, to appreciate the small things in life, to laugh at things that aren’t necessarily that funny. For me, the 2 sessions of counselling I went on, drove me mad by its concentration on the past. NLP doesn’t do the past, it is all about looking forward. And that’s why I believe NLP is the way to go. 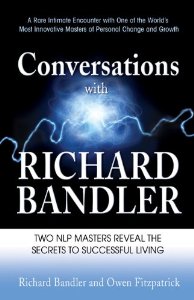 Owen’s book Conversations was written some years ago and is written as though it is a journey, his journey towards understanding more about how NLP works, partly based on his own experiences, partly on his work with clients and partly on his conversations with Richard Bandler. ?I found it to be a fascinating read – informative, positive, challenging, touching and somewhat emotional. Owen lays his soul bare and reveals how he was bullied as kid. Reading about this made me feel sick – maybe it is because I have a son who is almost the same age as Owen was when the bullying happened but it did make me see red. Reading about how bullying led to depression and then how NLP led to a greater understanding of how one can combat depression makes for grim reading in some ways, yet it is inspirational and extremely optimistic. ?Shit still happens in life, NLP can’t stop events happening but it sure can help how you cope, no not cope, how you overcome any difficulties and progress. 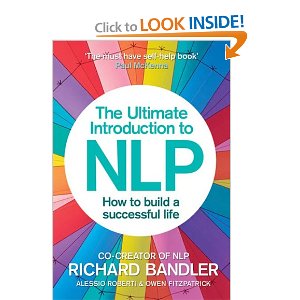 Conversations shows Owen to be the ‘student’, as if he is learning as he is writing it. Owen’s latest book (with 2 co-authors) ‘The Ultimate Introduction to NLP: How to build a successful life‘ works to explain NLP through the eyes of Joe who wants to improve his relationship with his girlfriend and progress further in his career. We ‘hear’ the NLP speakers through Joe’s ears, see the response of other delegates through his ‘eyes’ and understand NLP through his own thought processes. (One point here – I felt Joe grasped things much quicker than I would!!) The book works well to demonstrate how NLP can help people to understand others better (I don’t necessarily have the patience for this one, you either like me or you don’t, I either like you or I don’t but for those who do want to get on with people and have to work in open plan offices and build on relationships with clients – there’s great advice here). It also explains the ‘sleight of mouth and how to phrase questions or comments ‘the right way’. Owen is amazing at this. I recently had to make a decision, what was to me a very big and important decision as it would have a bearing on our entire family. I hate agonizing over decisions – I want to make a ‘yes’ or ‘no’ decision and move on. I detest discussing them with friends and then feeling like I’m no nearer the final decision as I find the discussion often makes me feel like I’ve just moved checkers around a board, I haven’t got to one end of it or the other. I knew Owen wouldn’t tell me what the answer should be, that he would be able to phrase questions in a way that would make me know the answer, would make me answer my own questions and know if ‘yes’ or ‘no’ was right. He did – in less than 15 minutes. I made him continue to do so for almost an hour ‘just to be on the safe side’ – yes, he is patient! Such is the power of NLP! ?Can every user of NLP be as good as that? I sincerely doubt it, Owen’s a master in it but reading these books will certainly help one to get closer to it. After all, it’s not everyone that is lucky enough to have this guy on speed-dial if they need him!

In case you are wondering why I might have Owen on speed-dial, he was the presenter/NLPer on the Not Enough Hours programme I took part in way back in 2009. ?I really wasn’t sure about doing the programme, I was afraid they would sensationalise all my failings. ?Owen promised me that he wouldn’t just be there for the 8 weeks of the filming but he’d be around for years whenever I’d need him – and yes, I hope RTE paid him well cos I’m holding him to his promise. I’m sure the kids will test me as teenagers and I’ll need help understanding their ‘map of the world’.

I recommend both these books – not just if you want to learn how to use NLP but also for making you become a more positive person. There’s a ‘spinning’ exercise in it which talks you through spinning backwards with a negative memory or feeling and apparently helps to diminish it. I didn’t do it – why? Cos I couldn’t think of one! NLP rocks – go buy the books! 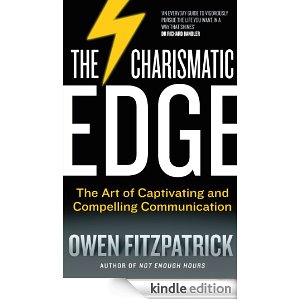 Owen’s being a pretty prolific writer this year. His latest book ‘Charismatic Edge‘ is being launched in Dublin on 5th April and is based on his Charisma bootcamp from last April (which was amazing). He’s also launching online training materials shortly too. ?The book launch will include Owen talking charismatically for an hour – I presume about the book! This guy is an amazing presenter, okay, I don’t get the ‘trancing’ stuff at all but if you are looking to learn about NLP and have a laugh at the same time (and laughter is great), book into this free event and buy the book when you are there. You can book a place at the book launch on facebook.

Oh, and check out his videos too. Like his facebook page for regular updates. I particularly enjoyed his NLP snack ones – less than 90 seconds on some way you can sort yourself out. The one on motivation/discipline really resonated with me – I’ve plenty of motivation, it’s the discipline to actually carry out that motivation I struggle with! Yes, I’m slowly becoming more disciplined with some things.

Everyone needs an ‘Owen’ in their lives. There’s not enough of him to go around unfortunately so the next best thing is to buy his books and watch his videos!

Still with me? See you at the book launch 🙂

2 thoughts on “Why Everyone Needs NLP In Their Lives”