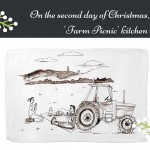 On the second day of Christmas, my true love gave to me …… a ‘farm picnic’ kitchen towel to remember those summer days of having dinner in the field where a tyre offered a backrest and an upturned bucket a seat and the food was tasty and the children raced around jumping over bales or swathes of silage. And you have a chance of winning one of these towels over on the Facebook page. 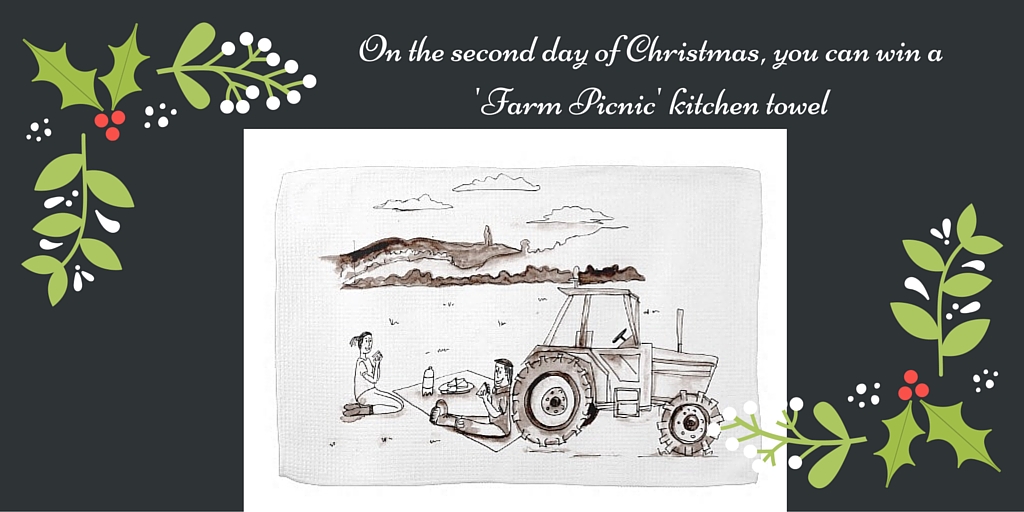 For any farm wives or husbands who weren’t brought up on farms, the idea of farm picnics might bring connotations of Cath Kidston napkins, wicker picnic baskets, neatly trimmed sandwiches and patterned rugs. It tends to be more of case of large flasks of tea, sitting on the tailboard of the jeep or a scratchy bale and eating dinners from large pyrex dishes. What can be a challenge is finding the right field! Yes, you need to be a good orienteer if living on a farm. Let me explain:

Nearly every field on a farm is named. Some are named after farmers from long ago. Others are named according to their shape or size. Some even have history in the name. One of our fields is named after a convicted murderer! The farmer knows the field names as well as he knows the names of any of his friends but it can take some time for you to familiarise yourself with them. I suggest you learn the names that apply to shape and size first. These may include Long Meadow, Big Field, Round Field and the Hill Field. Then work on those named for something in or beside the field: Road Field, Buttercup Field, Heathery Hill, Quarry Field, Chapel Field, The Letterbox. Some have very practical if less romantic names: The Field with the Hole, the Field beside the Yard, the Field behind the House, the Field in front of the House – you get the picture! By the way, there is nearly always a field called The Bog – the wettest field on the farm.

It’s worse when fields don’t have names. You’ll need a good sense of direction when you get instructions to go to “the field that’s above the third field over, but you can’t access it that way so you’ll have to go up two paddocks and then over diagonally to the third field on the left, the one with the gorse in the hedge”. They probably all have gorse in the hedge, but you need all your observational skills to realise that field has more than the others.

If you’ve been told to bring food or spare parts to a particular field, give yourself plenty of time and don’t get flustered. Take the male approach: you never get lost, you were just taking your time.

For a chance to win this ‘farm picnic’ kitchen towel (and it should arrive in time for Christmas), leave a comment on this Facebook post before 12th December and I’ll announce the winners then. I want to know what’s your favourite food for a farm picnic.

And if you’d like to purchase the ‘farm picnic’ kitchen towel or other items, I have many of the illustrations from my books on various merchandise in my Zazzle shop.