The Irish Wake is popular within Irish folklore and within Irish books (or at least it was popular when I was in school!) so I just thought I would write a post showing what the modern Irish wake is like, and to be honest, it is probably not all that different to what it was like 50 or 100 years ago. Less alcohol now but the principle is still very much the same. 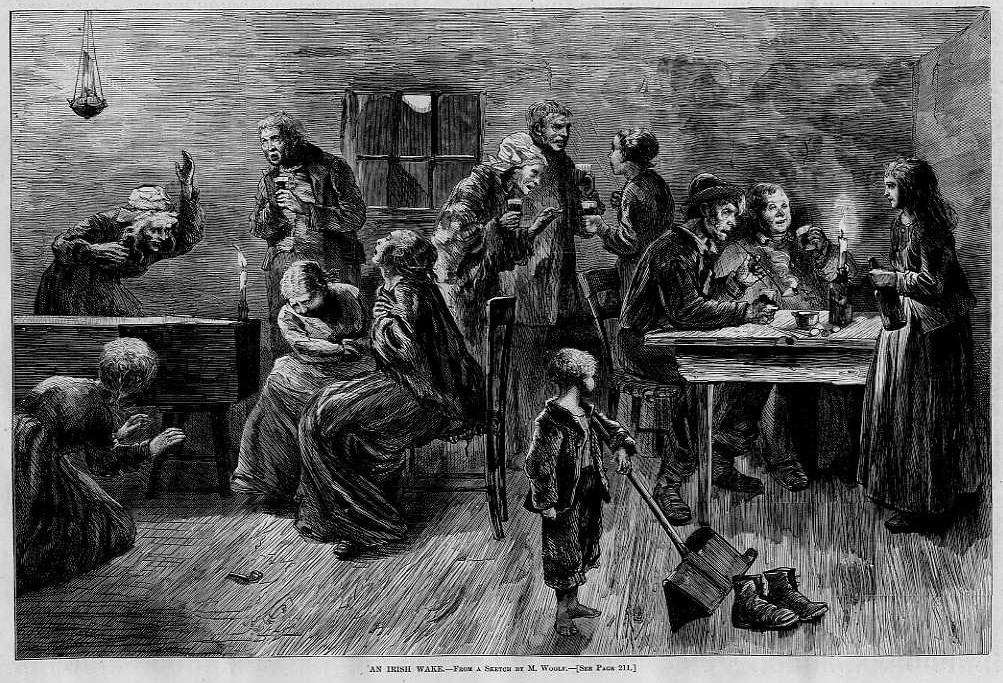 I’m writing about rural Irish wakes as they are probably quite different in the larger cities. ?There are many similarities between the Protestant and Roman Catholic wakes too with very few differences between them.

I was 17 when I saw my first ‘dead’ person. My paternal grandfather died before I was born but the others lived until I was in my early 30s. ?I’d never lost anyone I was close to until I was 17 when Tommy Byrne who had worked for us for 21 years died, aged only 50. Going into the funeral home, I’m not sure what I expected but I didn’t expect to see the coffin open and I can still remember that jolt of shock.

An elderly neighbour died recently, a lady I would have visited many many times as a child and teenager and when we had hens a few years ago, I used to bring her half a dozen eggs once a week. The children used to enjoy visiting her as she always gave them chocolate or biscuits and she loved to see young children coming in. She had failed considerably in recent years and while her death was sad, it was better that she pass on than stay living a life that had little interest to her. Bringing the children to the wake, I explained to them that she would be in the coffin and did they want to see her. They both said they wanted to and I felt it wouldn’t do any harm. Moving into the bedroom where she was, there were a couple of people sitting on chairs against the wall and they nodded to us as we approached the head of the coffin. Being Church of Ireland, I always feel conspicuous when going to an RC wake or service as we don’t bless ourselves and I could feel the other people’s eyes on us as we stood there and I spoke in a low voice to the children trying not to feel too conspicuous re the the absence of blessing ourselves!

It is still viewed as ‘the proper thing’ to bring a person home to be waked in their own home and give them a ‘good send off’. People will come bearing trays of sandwiches and cakes, neighbours will arrive to help with the washing up and the making of copious pots of tea. After viewing the corpse and sympathising with the relatives, the mourners are ushered into a dining room or the kitchen where a table is laid with china tea cups (never mugs for a wake) and plates and the table will be heavy with plates of sandwiches and slices of various bracks, cakes and buns. You cannot leave without having a cup of tea! Everyone sits for at least half an hour and chats to whatever neighbours, visitors and relatives that are there. Topics will vary from how the death occurred, the life of the deceased, stories about the deceased to the weather, farming news, other deaths that might have taken place recently and other local news. A black ribbon will be tied to the front door. Within some homes, all the mirrors will be turned to the wall or covered.

The only difference really that I have noticed between rural wakes of the 2 main religions are that people will stay with the corpse all night within the RC religion, neighbours will stay with the family and they will sit drinking tea or perhaps something stronger. Within the C of I, we must need our sleep more, a funeral can be exhausting as you have all the entertaining on top of the grief and making the arrangements and the last visitors will probably leave about 1am while the family head to bed.

Burials happen quite quickly in Ireland. For example, if a person died on a Monday morning, he will be certified dead by a doctor or if in hospital already, it seems to be quite straightforward. He is then removed to the funeral home to be prepared for burial. Occasionally the person stays in the funeral home until he is removed to the church but generally he will be brought home and laid out in the coffin in a downstairs room in the home. Visitors will flood in and out of the house all that evening and the next day. Generally, the person is removed to the church for an evening service (with prayers before leaving the home) on the Tuesday evening and there will be a morning (seems to be more morning services within the RC religion) or an afternoon (C of I) service on the Wednesday followed by all the attendees to the funeral being invited either back to the home or to a local hotel for refreshments afterwards. It is viewed as a mark of respect to the deceased person for the mourners to go along for the refreshments if they knew the person at all.

Why do I say that ‘if you knew the person at all’? Because in Ireland, it is quite common for people to go to funerals even if they had never met the deceased but if they knew any of the family related to the deceased. Irish funerals can be huge! ?A eulogy will normally be read during the day service, often by a family member but if not, the priest or clergyman will speak about the deceased. This is another difference I have noticed between the religions but this might depend on the personalities of the clergy as the C of I clergy tend to talk about the deceased for longer than the RC priests, but our congregations tend to be a lot smaller so births and deaths tend to be rarer occasions!

Obviously, wakes for young people who have died unexpectedly or tragically are unbelievably sad. ?However, for those who have lived a long life, while people’s mood will be sombre, it is much more a celebration of the person’s life.

Have you noticed any differences about Irish wakes in cities? While I have been to funerals within cities, I actually haven’t visited any wakes.

3 thoughts on “An Irish Wake”