Have you ever played the part of a tourist in your own area? I’ve done it before when we’ve had visitors staying, we’ve brought them to those places loved by tourists and enjoyed the venues ourselves. Last weekend, I had the opportunity to explore the beauty of Carlow and yes, I admit, I ended up being a little ashamed that I haven’t made more of an effort to enjoy it in the past.

I do think it says a lot that it takes three women from abroad to really appreciate all we have on offer here – does this mean that we, in general, really have the ‘grass is greener on the other side’ attitude when it comes to our own localities? I’m sure I could create a joke about an Englishwoman, an American woman and a German woman if I was a comedian but for now, let me let you about these three. Susan and Dee have set up Green and Vibrant, they organise blogger tours for tourism and eco businesses. Businesses are appreciating the value and worth of bloggers in terms of spreading the word and building awareness either via their written blog posts, podcasts or even their tweeting. Bianka is originally from Germany and has been living in Carlow for many years. She set up Carlow Tours last year?and she is passionate about the beauty of history of Carlow.

As I mentioned last week, Carlow has had a rough time of it in the tourism stakes in the past. Sandwiched between the historic Kilkenny and the Garden of Ireland (Wicklow), it is often overlooked as people travel from Dublin to Galway or Kerry ?but there’s lots to offer and here’s a snapshot of what I saw last week as part of ‘Taste of Carlow’.

We started off the morning meeting Bianka and her mini bus taxi and heading to Ducketts Grove. Now, I’m a frequent visitor there – partly because their hot chocolates are the best around and they are also reputed to be calorie free! In fact, I have spent so much time in the tea rooms I have never actually looked around the castle so now was my chance. Incidentally, as Bianka informed us, it was never really a castle. It was originally a good sized two storey home. The son had more ideas of grandeur and having married a banker’s daughter, he could afford to add on the occasional turret! 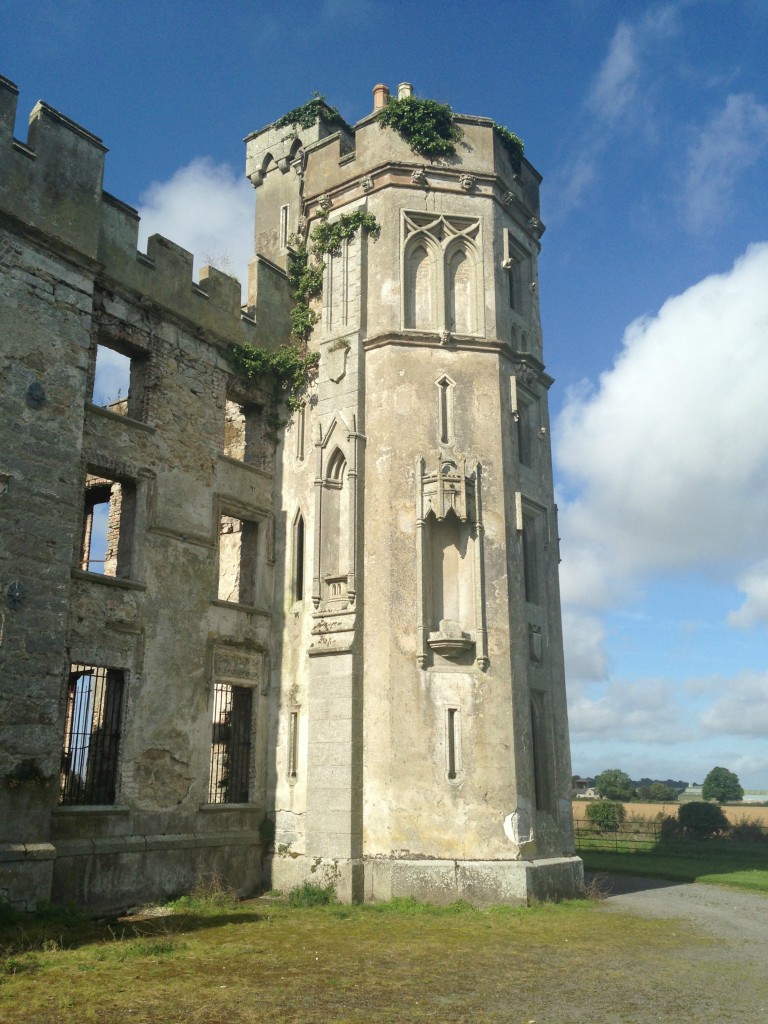 ?I hope I have the dates right, as far as I remember from Bianka’s tour, the house was extended to incorporate numerous turrets and gargoyles and other rooms by 1860s and it burnt in 1933. The arson was not due to the Black and Tans or the civil war but an attempt to get some insurance money apparently. What was particularly interesting was hearing about how the original Duckett family were good landlords and employers, how they treated their workers and servants and rewarded loyalty. The turrets look effective don’t they but guess what – there isn’t actually rooms inside, they are dummy rooms, the turrets are there for effect. As you can see, 80 years after this building burnt, it is still a beautiful gothic building. 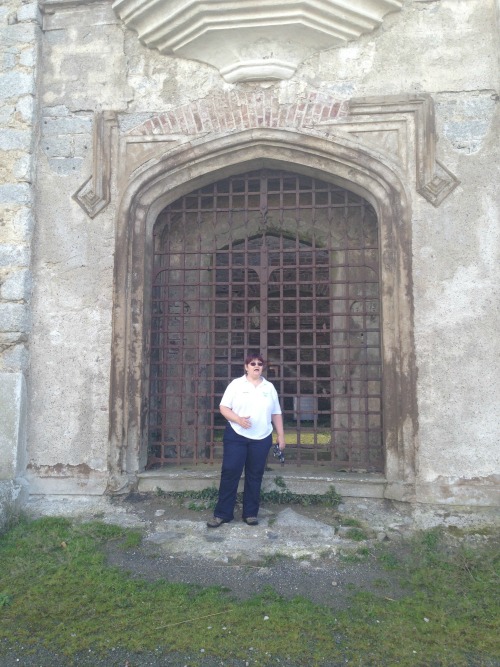 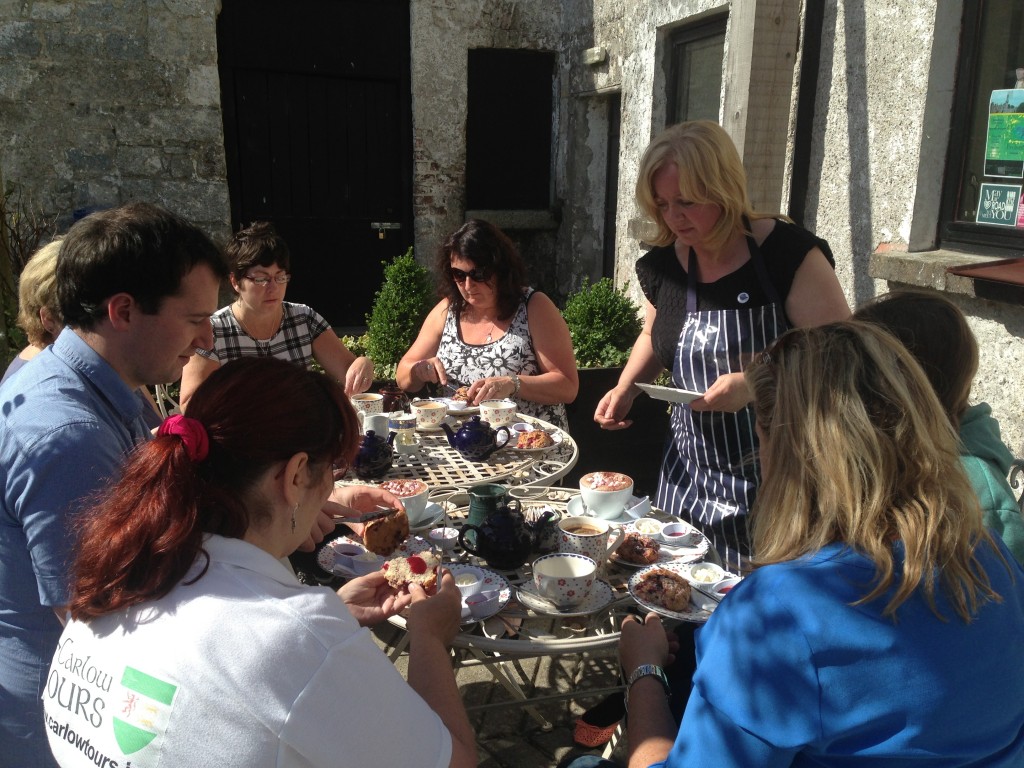 We were gasping for tea after our tour around the walled gardens and Madeleine had her award winning scones and hot drinks waiting for us. The sunshine was fabulous so we all sat outside and ooohed and aaahed and then went silent as we tucked in. One of the great things about blogging too is that we all met via blogging (apart from Dee and I who met at a toddler group years ago) and we all feel we know each other well from our blogging and tweeting and occasional offline meetups. 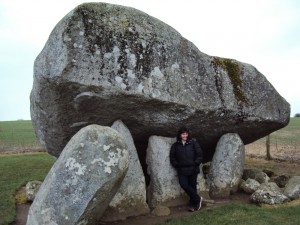 We passed by the Carlow Dolmen then on the way to the Taste of Carlow Event. Over 5,000 years old, this is hugely impressive yet somewhat under stated in its scale and magnificence too.

If you wish to avail of Bianka’s guiding services, here’s some details of the Ducketts Grove and Dolmen tour.

The ‘Taste of Carlow’ was a one day event – with 40 food producers selling their produce, food demonstrations and much more on the banks of the Barrow. There were plenty of swans on the river, lots of space for picnics and running around in the park and the sun was shining. The Farmers Market had prepared a picnic for us. I got to see a cheddar making demo which I really enjoyed – really made me decide that I have to give it a go at some stage. Tom Burgess of Coolattin Cheddar milks 120 cows once a day and makes cheese from their milk four times a week from June – September. He only makes cheese during those months as the milk is of the best quality then, being 100% of the highest quality grass. Yes, you get out what you put in! The cheese is made from raw milk and can be found at farmers markets and at cheesemongers.

I seem to have developed an immense appreciation for cheese since I visited the Cheese Awards. I bought 7 cheeses on Sunday and each is nicer than the other – I really don’t think I will ever eat supermarket cheese again, there’s no comparison.

We were also treated to a short talk and some tastings via the eco queen Mary White. Foraging is making a huge comeback and what I found particularly interesting (given my recent penchant for topics to do with marrying farmers) is that Mary offers hen parties the fun of expert tuition in foraging in her nearby woods and then cooking with their spoils. Judging by what she gave us to taste, you’d be well on your way to becoming the perfect farm wife as well as having good craic. You can also go on an eco trail in the Blackstairs mountains. 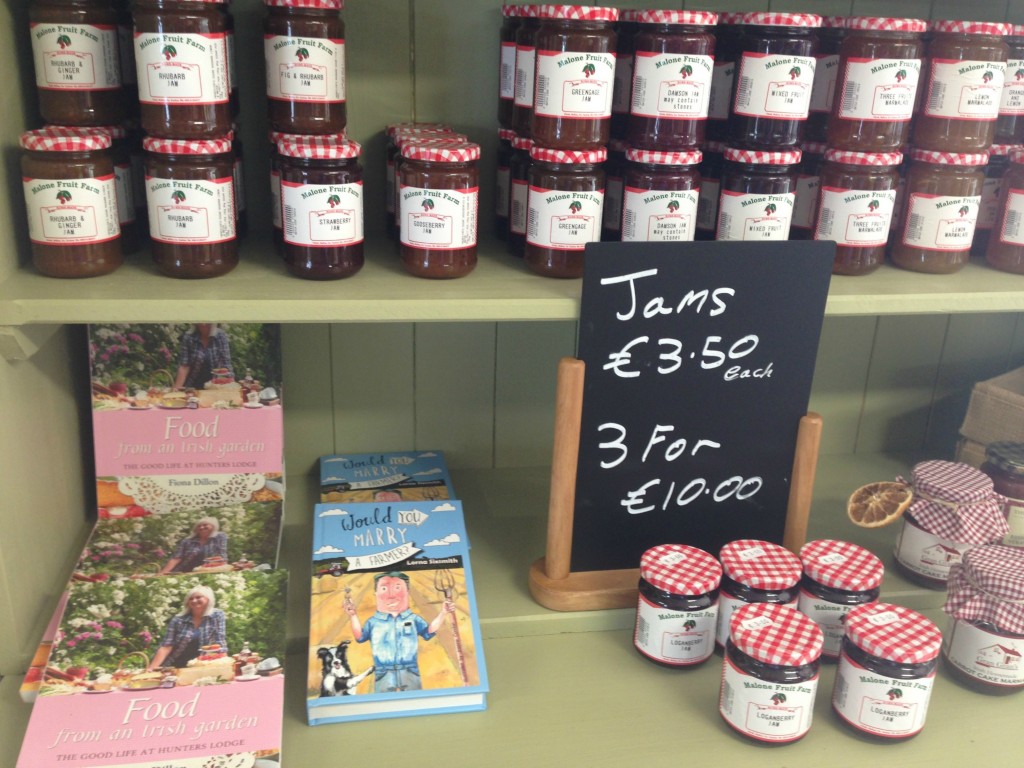 We were then given a tour of Malone Fruit Farm, getting some tips on growing fruit and seeing strawberries growing happily suspended in the air. Apart from the wonderful selection of books on offer in the shop, there’s lots of yummy goodies and yes, I stocked up on more Carlow cheese! If you don’t live near Carlow by the way, you can buy from them online now and they will soon be selling veg/fruit boxes weekly too.

Bianka brought us to Huntingdon Castle next, a walk along the magnificent yew walk and into the castle for a tour. It’s been in the same family for hundreds of years with a very colourful history and we were able to see many of the ground floor rooms and the basement. The tour was very entertaining and as the house is haunted, their Hallow’een tours are recommended as being especially chilling as well as fun – great place to bring older kids I’d say. 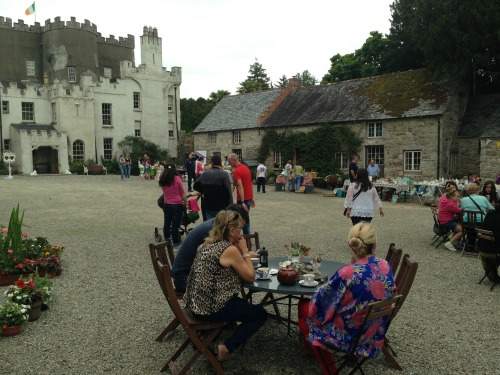 There was plenty of ‘olde worlde’ atmosphere in the courtyard – bunting, tables, a tea rooms, stands selling antiques and not to mention the two pot bellied pigs snoring in the shed – it really had a lovely atmosphere and we enjoyed another cuppa and cake before departing. 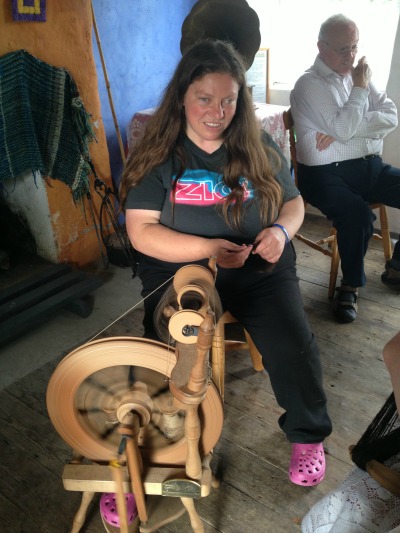 The weavers cottages in Clonegal are worth a visit too – you can see the size of the dwellings that families of ten and twelve people once lived in, watch wool being spun and wound and weaved.

This is where I really felt shame! We have often mentioned that we should take the kids up to Mount Leinster, it’s probably 30 years since I was last there and it takes a bloggers tour to get me there. The mist was coming down as Bianka drove up the steep hills and as we reached the Nine Stones (about 200 metres from the top of Mount Leinster – the top can be reached on foot), the rain was coming down. You can see five counties and as far as Wales on a clear day. Even though the picture is misty, you can see the potential beauty and yes, I will go again on a fine day and share it with you then! 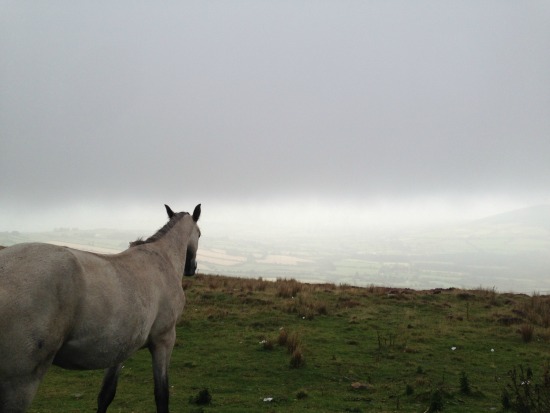 We then headed to the Step House Hotel in Borris. I’ve been meaning to visit here for quite some time too. In my defence, we don’t get out that much! ?Between the lovely surroundings, the award winning chef and the fact that the scrumptious Gaelic Escargot are sometimes served there, I was really looking forward to it. A tasting menu had been organised – salmon, pork, duck, monkfish ending with carrot cake. Now, of course, it’s wasn’t just ‘pork’, they were all elaborate and beautifully presented with lots of tickling of tastebuds. 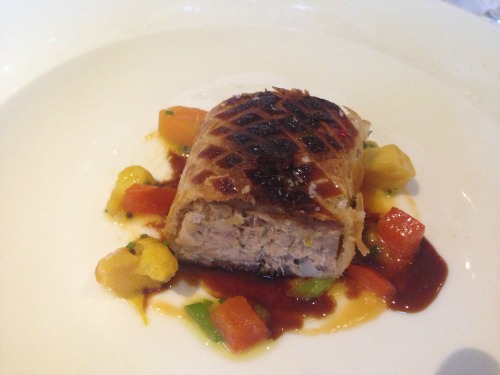 Put it this way, I’m hoping to have something to celebrate in October and I’ll be returning. Looking forward to having some escargot then too. They have 20 bedrooms and it’s exactly the place to enjoy some quality time with your nearest and dearest.

Tired and sated, we headed home with our goodie bags containing whisky cake, O’Hara’s ale and apple juice – still to report on how yummy they all are. A wonderful day out, very proud to be a Carlovian. Whether you are visiting Ireland or live in Leinster, don’t forget to check Carlow out – there’s so much to see and do. If you want the personal tour, remember to book Bianka of Carlow ?Tours too – I’m loving the look of her Altamont Tour, Altamont really is the jewel in the crown of the county.

9 thoughts on “Carlow is Tasty … and Beautiful”