I ?brought the children to see the Human Body Exhibition in the Ambassador on O’Connell St in Dublin. ?I often find that I see something on and think to myself that I must bring the children to it and then time passes and it is gone. 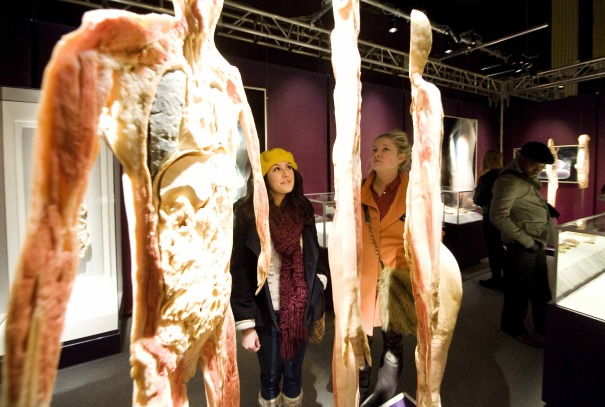 I was a little unsure what the children would make of it but they tend to be interested in science. ?It really is an incredible exhibition with bodies dissected and revealed to show incredible detail of bones, muscles, sinews, organs and more. ?Will (aged 9) was intrigued and wondered why they were all men until we came to one female exhibit and he came running back to tell me there was a lady! Kate (aged 7) was a little perturbed, describing the leg muscles as looking like bits of dried up chicken (and yes, they did!) and saying some of them were rude (men’s bits!).

The exhibits were extremely well done, showing bodies in various poses as they played sports or music, showing various muscles on display and every possible dissection you could imagine – vertical, horizontal, layered, sections – it really was incredible.

What I was somewhat uncomfortable about was that there wasn’t any story provided with any of the bodies, there wasn’t any reassurance that these people had permitted their bodies to be used for research or display, there was no story to tell us how ‘Mary’ had lived, what age she had died at, what she worked at etc. ?The fact that all the bodies were Chinese and it has not been possible to discover if the bodies were donated voluntarily or if they are the remains of political prisoners. (The Journal). 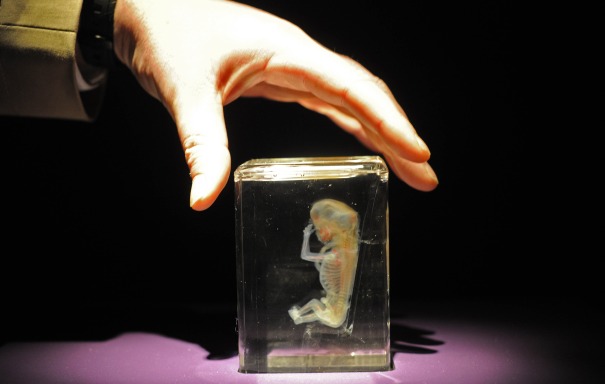 They also have foetuses on display. As we looked at the tiny embryos that ranged from 4-8 weeks, my daughter was tickled pink to think that she was that tiny at 6.5 weeks when I was so sick that I had to be hospitalised and put on a drip. The power of a tiny foetus! Having had 3 early miscarriages, I was somewhat reassured in a strange way ?as I looked at this tiny ‘blobs’, somehow they reassured me that things were not meant to be, they were just so small, they didn’t have any semblance of growing into a fully grown human, that it was down to ‘Mother’ nature. However, looking at the 12 week foetus was a different story, here was a tiny tiny baby with tiny ribs and arms and legs and I know if I had miscarried a baby at 12 weeks or at any later stage, that looking at that display would have been like a kick in the gut.

It took us a little over an hour to see the whole exhibition but I must admit, Kate kept pushing the two of us on whenever she saw a ‘rude bit’! 😉

Have you been to see it? What did you think?