I headed to the Virginia Show today armed with my pop up banner and a box of books to sell. I’ve never been to it before, it’s 2 hours drive so with cows to milk morning and evening, we’ve never made it that far. The committee have worked really hard to raise funds for and to build a new centre and it really is tremendous – cafe, meeting rooms, huge hall, lots of rooms upstairs, it really is a credit to them. ?I was located in the large hall, and my backdrop were the Holstein Friesians in the Diageo Bailey’s Champion Cow contest. 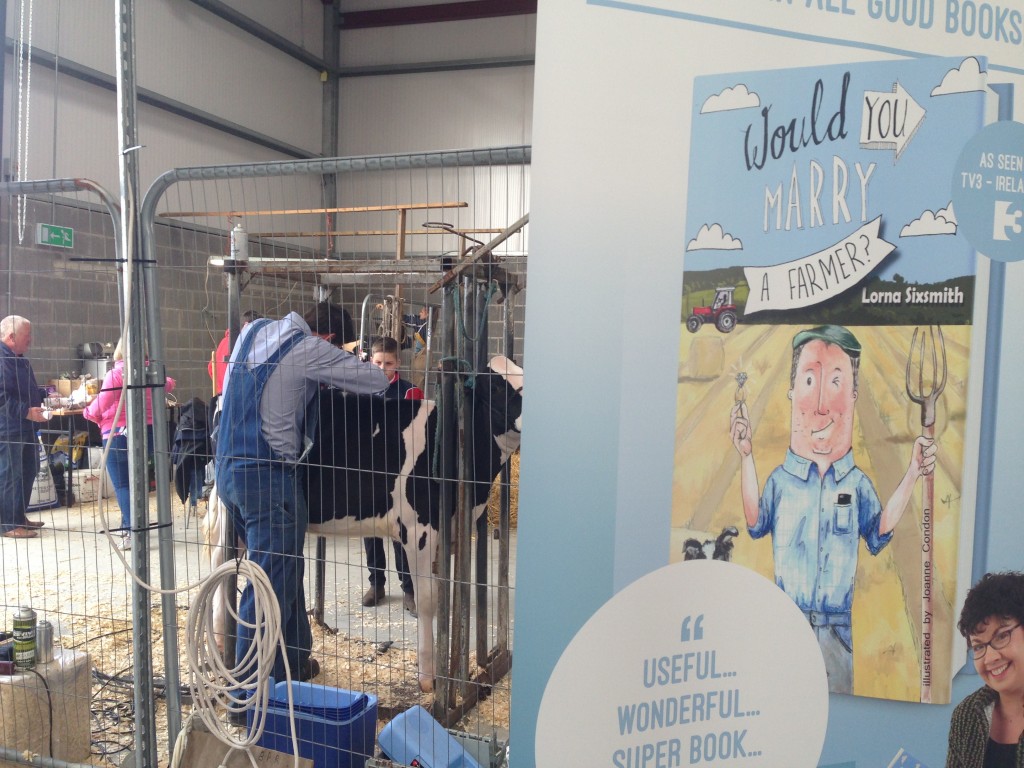 Now, I know racehorses receive a lot of attention but so did these girls. Some of these cows had been there since Monday but they weren’t left unattended, oh no, their owners and keepers slept in the shed with them! Now, that is dedication. 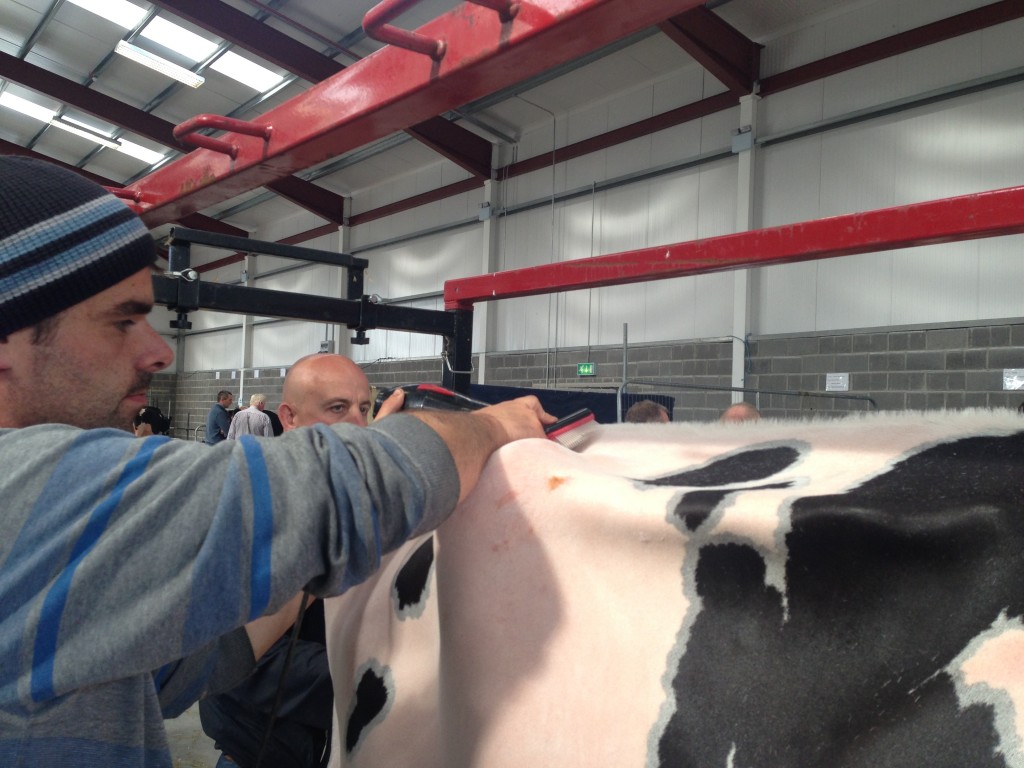 Cows had been shaved, cleaned, polished, udders oiled, hairpieces brushed and placed at the end of their tails, buckets at the ready in case any decided to make a bowel motion – yes, there seemed to be a person on guard with a bucket of straw at the ready for each cow and at any sign of a tail going up, that bucket was lifted up and the cow carefully cleaned again in case of any splashes. Men took out the hairbrushes and hairdryers to brush that top line of hair into position, making sure it was trimmed so that the cow appeared to have a straight top line along the hair line. I wondered if these farmers made good husbands given their skills in preening! I was there before 10am. The competition didn’t start until 3pm – that’s a lot of time for preening. I will never scoff again at a person who says she takes 2 hours to get ready! It’s a hugely prominent competition though but I did admire their patience and attention to detail. Showing cattle really is a labour of love. 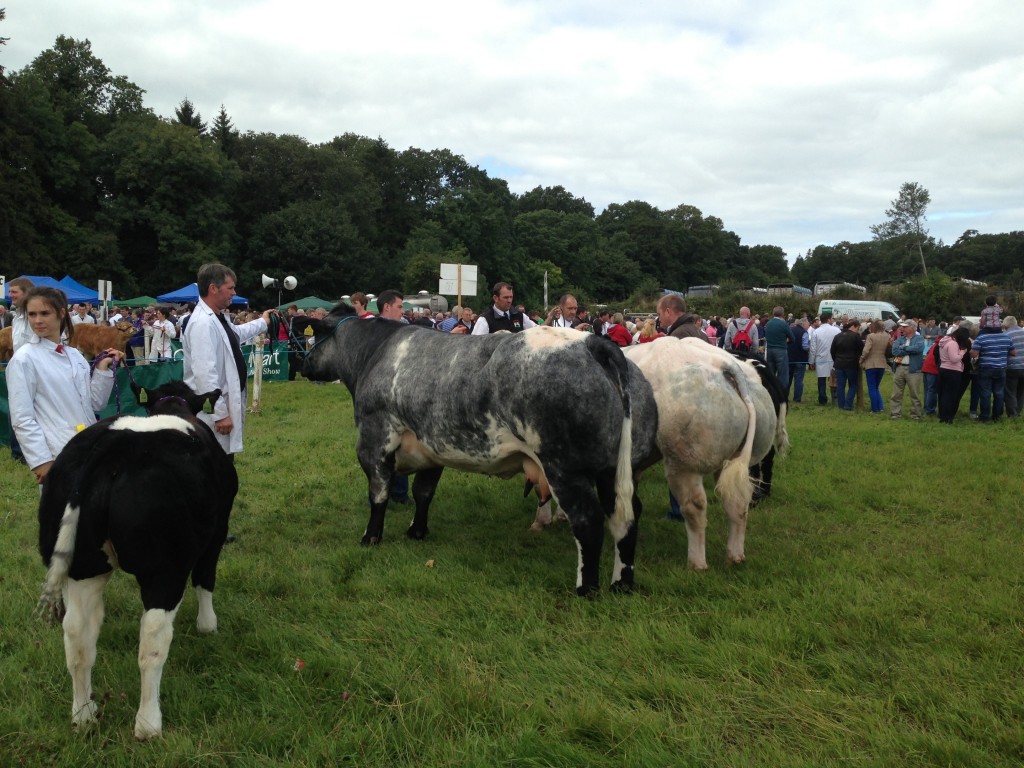 It’s a great show – so many shows have rows and rows of tents and trade stands. Of course, this had stands too but it very much felt that the show rings of cattle, horses and sheep were at the centre of it, that they were the main attraction (which of course they were). There was a good buzz too, weather was lovely and as it is a local show, lots of people were using it as a way to meet up with others too.

I got a very different response to my books compared to Tullamore which was interesting. It gets a smaller crowd, 15,000 compared to 50,000 but there was good footfall through the building. Sold 15, not that many people had heard of it so it relied on me explaining what the book was about and then on them deciding whether they wanted to buy it or not. They were a more serious crowd too, I had good banter with lots of people at Tullamore but today’s crowd just didn’t seem to get the humour as much. The reactions to seeing the title of the book were very different – more of a ?”I married a farmer, don’t need the book now”. ?I was amused at one man who was looking through it and was commenting on it being self published. He then asked if I’d managed to get it reviewed on the radio. It was with glee that I named off Ryan Tubridy, RTE Countrywide, Joe Duffy, Ivan Yates, multiple local radio stations and of course, TV3. He did buy a copy!

That’s the end of the shows for me until the Ploughing Championships on 23rd September! Looking forward to Lisdoonvarna now too.

I’d love to know – do you think these farmers that spend hours preening their pedigree cows make a good catch? Would you like to marry one of these farmers? ?I think I’d be concerned that the cows would get all the attention! I think a man that spent longer in the bathroom than me would drive me mad but on blowdrying the cows! They would want to be making money! But then, if I was the type that spent hours getting manicures and highlights, maybe it would be good if we could compare bovine and human notes!

2 thoughts on “Would You Marry A Farmer at Virginia Show?”