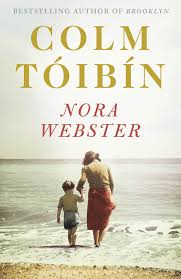 Colm T?ib?n returns to his native Wexford for the setting of Nora Webster

, the story of a 45 year old woman widowed in the 1960s and her struggles for forge her own identity, fund her daughters in college and look after her younger sons.

The book opens shortly after Nora?s husband, Maurice, dies. Unable to work as a wife due to the marriage bar, it is with some reluctance that she returns to the job she had before she got married. Reluctant as she had wanted to do more with her life when she left school and now she was going to have to work under women much younger than her as well as an old enemy. You get the sense that Nora always wanted to do more with her life than work with an office and now it seems like a step backwards.

The reactions of the characters to events in the 1960s make for interesting reading. Nora is impressed with Charles Haughey because he increases the widows? pension whereas others need more convincing. Different members of the family are enthralled by the moon landing in 1969 and the various events that spark off the Northern Troubles. The reader is reminded of the greater divides between people of different religions then ? through discussions of whether Catholics or Protestants make the better employers, the different social circles and indeed, what her family might think of Nora if she reads the Irish Times, known otherwise as a ?Protestant paper?. Less than 50 years ago, it shows a very different Ireland to the one today. ?Yet, some similarities remain!! Nora feels her every move is watched and discussed by relatives and neighbours and yet, she takes on new challenges without asking others for their opinions. She sells their seaside cottage, she gets a job, she joins a musical group, she practices singing again, she travels to Dublin to buy records, she gets her hair dyed, she re-decorates a room in her house and at last, three years after her husband has died, she says goodbye by removing his clothes from their wardrobe and she moves on with her own life.

I did feel some frustrations with the novel ? as it centres around Nora and her feelings, we are left guessing what the other characters think ? I wanted to know more about her sons? feelings, how they really felt as their mother left them to go to work, how Donal was coping with his stammer, how they were conscious that no one talked about them being on their own in the afternoons, how Donal felt about moving schools but then it wouldn?t have been a novel about a 1960s wife becoming an independent woman, re-creating her own musical career. I think it’s interesting as T?ibin based it on his own experiences of being a 12 year old who developed a stammer when his father died yet I felt Donal’s character was in the shadows.

?for its take on life in the late 1960s particularly regarding women in small communities. It’s not a page turner but it is a good read.