I’m conscious I haven’t written a post about the #horsegate saga yet, partly because I know I’ll probably start to rant and never shut up but will try to contain my angst and not ramble on!

It beggars belief that an Irish abbatoir has been deliberately labelling horsemeat as beef and exporting it. A criminal activity that I hope lands them in jail, given the pride, money and work that goes into the traceability of Irish beef. ?Farmers have to keep meticulous records, not just of the animal’s passports, their dam and sire but also of every single medication and vaccination they receive. Strict withdrawal periods have to be adhered to. ?If paperwork is not correct and it is discovered by those in authority, fines are enforced. We recently had an inspection and they went through everything with a fine toothcomb, everything was fine but still it was a tiring day. ?Apparently there is one member of staff in the Department of Agriculture for every 29 farmers – somehow I think they need to get some of those staff onto the case of the abbatoirs and regulating what happens to horses. 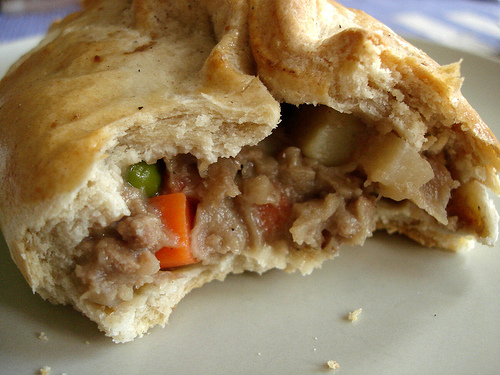 So many companies are withdrawing food – Tescos and Nestle with their ready meals, cooking sauces, Ikea’s meat balls and hot dogs and the list goes on. Taking Tesco as an example, did they really think that the ready meals they were buying so cheaply were going to contain meat that was ticking all the boxes? ?Did they just choose to ignore it? Probably. After all, their consumers were demanding cheap food. So who do we blame – the consumers, the supermarket or those replacing beef with horse?

I would never claim to be a domestic goddess or a foodie blogger. I’m not the kind of cook who can taste a meal while cooking it and decide it needs more basil or oregano or salt! ? ?I do give my kids convenience food sometimes – we have fish and oven chips or sausage and oven chips probably once every 3 weeks. ?I would never suggest that mums that are working 9-5 7 days a week with a commute should spend 90 minutes slaving in the kitchen every evening – it is possible to cook a meal in 30 minutes after all! ?I know there are families that are struggling with the grocery bill but I do wonder what percentage of them are buying food that is more expensive than it should be ie convenience foods when it is much cheaper to buy fresh and throw it into a casserole dish and cook it. ?A friend of mine who is a Home Economics teacher was telling me about kids she taught once who didn’t know what a fresh carrot was, they thought carrots came in jars and potatoes in tins!

What concerns me is that fast food, convenience food, in the shape of ready meals is being served up to families and kids are growing up thinking this is the norm, this is a nutritious dinner and it is full of eeee’s and god knows what. ?The good thing about #horsegate is that more people are actually going to their butchers rather than buying meat in supermarkets and the sales of processed food has decreased but I wonder how long it will last. ?Delia Smith was on Graham Norton recently talking about the videos she is producing so that people who can’t manage to read a recipe book, can follow a video and learn how to cook.

I was shocked recently when I read a post by a food blogger – so much so I had to read it three times to ensure I was interpreting it correctly. ?She stated that many were criticising those who weren’t buying their meat in a butchers from their ivory towers. ?She claimed that she sometimes purchased a ready made beef pie as they take 2 hours to cook and at home all day with 2 young children, it just isn’t possible to do quite often (and maybe she said it was cheaper to buy the ready made pie – I can’t recall)

Well, if a ready made pie is cheaper, wouldn’t that raise your suspicions? ?Nothing turns my stomach more than butchers and supermarkets claiming that x number of kids can be fed on cheap party food such as chicken nuggets. ?I can remember eating ready made chicken pies occasionally as a teenager. There was some meal my mother used to cook that I didn’t like so she used to pop one of the individual frozen chicken pies in the oven for me. I loved the taste of them, loved the pastry but I was always struck by the single bright green pea in it (as illustrated on the packaging too) and wondered if there was a person with the job of putting a single green pea into each one or if it was a conveyor belt!

Anyway, I love a challenge! I’ve never made a beef pie in my life, thinking that it would be a time-consuming palaver so I decideed to make one and see if it would take me 2 hours and how much it would cost for the 4 of us. ?I used a Delia Smith recipe for steak and kidney pie and off I went. ?First thing to mention is it doesn’t take 2 hours of standing there mixing and stirring etc. It does take 2 hours to cook it but you can leave it for over an hour and go off and hoover, or write a blog post or read a book or play with your kids. Okay, no one is going to start making a beef pie when they get in from a long day from work, well, I wouldn’t but if I was at home – it’s easy peasy. ?And it’s pastry – how better to amuse 2 young kids than giving them each a ball of pastry and letting them roll it out again and again. Ok, you’ll have to add 10 minutes extra cleaning up at the end but they’ll have been entertained and they’ll be learning too. ?I can well remember the days when the kids were little and my day revolved around breast feeding, changing nappies, getting out for a walk, getting them to have a nap and cooking a dinner. Throw a kids activity into the mix and it made for a very busy day. I wasn’t even blogging back then either. ?I can remember having the kids in the high chair or standing at the worktop and as I chopped the veg, they would throw them into the saucepan ‘helping’!

Making the pie was surprisingly easy – bung the chopped stewing pieces and the onion into a saucepan, add the other ingredients and mushrooms and abandon ?for almost 2 hours while it simmers. Make pastry (and find some frozen fruit in the freezer so make extra pastry for a fruit tart while you’re at it) and bung in the fridge to ‘rest’ until the rest is ready. ?Abandon! ?Now, I didn’t have the right sized dish and used a casserole dish which was too big and the pastry kinda sank down so it wasn’t that picturesque so I didn’t bother to take a photo! However, it tasted delicious and I’ll definitely be making it again. I reckon it cost about ?10 to make and it fed the 4 of us and the dog got a bit too!

I read something recently that said that Americans (who are apparently the unhealthiest nation in the western world) spend 10% of their income on food and the Egyptians (no idea how healthy they are) spend 44% of theirs on food. ?I know some families are stretched financially but for those who can afford it, that many are spending less money on nutritious food for a family dinner than a couple of cups of coffee and cake is scary! ?What concerns me most is not the occasional convenience meal of fast food as fast food, it’s the presentation of fast food (ie ready meals) as a nutritious meal. There’s probably more nutrition in the packaging! 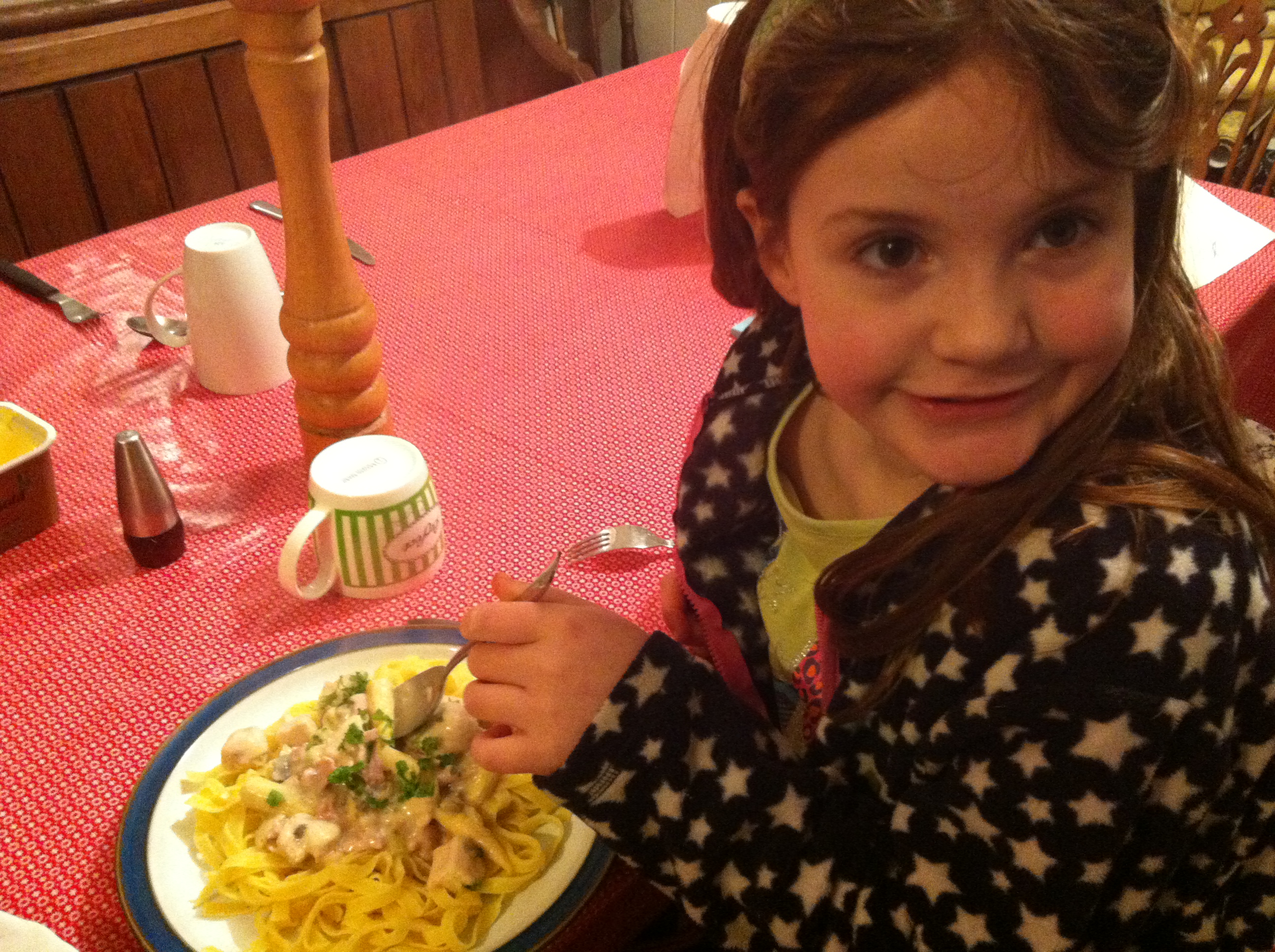 I timed myself making a pasta chicken carbonara the other day. I was aiming to have it on the table for 3:45 (we have dinner when the kids come home from school) and I started chopping at 3 o’clock. In that 45 minutes, I was running up and down to the yard every 10 minutes checking on a cow calving as Brian was at the outfarm and the camera wasn’t working. It was quite funny actually, at 3:25, the head and legs were out so I burst the water bag, watched her for a couple of minutes, then I had to drive down the avenue to collect the kids at 3:30, fly back up, run up the yard and the calf had been born – all well and then in to put on the pasta. Dinner was on the table by 3:45! ?I’d never time myself normally so I felt like superwoman!! ?I was away for much of the day today and prepared a casserole in 20 minutes – left it in the oven with potatoes wrapped in foil and it was all ready for the family when we all got in. ?As I said above, I don’t claim to be a foodie blogger or a domestic goddess, I wouldn’t be mincing some beef and making my own burgers or anything but I can throw a nutritious meal together pretty quickly and if I can do it, believe me, anyone can. Up to ten years ago, I rarely cooked – Brian did it all – if I cooked once a month, it was good going!

Now, I know women get a tough time – we’re supposed to be successful business women, have careers, craftspeople and knit in our spare time, bloggers, mums, cooks, sew beavers badges, bring kids to activities, cook nutritious meals and goodness knows what else, and I don’t want to add to that even if this blog post probably suggests I am! ? However, if parents can’t set a good example to kids re how to cook a meal then heaven help the next generation given the levels of obesity.

I really hope the horsemeat saga doesn’t have a negative effect on beef sales. It is good news that it is having a positive effect on butchers and I hope people continue to buy from their local butcher, particularly those with an abbatoir attached and you know the meat comes from a 10 mile radius. ?When you think that horses are travelling on boats with no regulation for their welfare, that they are being slaughtered with traceability and assurance that they haven’t just been injected with goodness knows what, and then the horsemeat is travelling tons of carbon miles – it really is madness!

Blog posts I’d recommend reading on the whole horsegate sage include those of Suzanne at Basketcase and Dee’s post at Greenside Up.

12 thoughts on “How Long Does It Take To Cook A Nutritious Meal?”